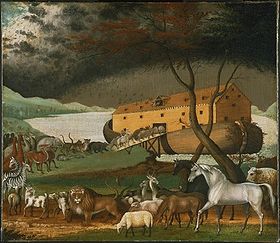 I truly hope this is a case of confused reporting or intentional sensationalism to drive page views. ABC has an interview with Robert Ballard and PoPo links it saying he’s looking for … Noah’s Ark:

HuffPo — Robert Ballard, one of the world’s most famous underwater explorers, has set his sights on proving the existence of one of the Bible’s most well known stories. In an interview with ABC’s Christiane Amanpour the archaeologist who discovered the Titanic discussed his findings from his search in Turkey for evidence of a civilization swept away by a monstrous ancient flood.

“We went in there to look for the flood,” Ballard said. “Not just a slow moving, advancing rise of sea level, but a really big flood that then stayed… The land that went under stayed under.”

Maybe it’s just wishful thinking, but maybe there’s a chance Ballard is really looking for an event that could have been one of many events that formed the basis for the Gilgamesh legend, the same story later adopted in the Old Testament and renamed Noah’s Ark (And according to info available in comments, it’s looking more like HuffPo’s usual histrionics than comprehensive reporting). Maybe the reporter or editors or marketing gurus decided they’d get more hits pandering to Biblical literalists and skeptics like us by glossing over that subtlety.

Because if he’s really looking for a wooden boat that housed the ancestor of every species on earth in the midst of a global flood that covered the tallest mountains, he’s unusually dangerous or a common conman, or possibly both. That belief would indicate a lack of the most fundamental knowledge of the world’s oceans, earth’s geometry, and basic marine engineering, a lack so profound he should never be allowed behind the wheel of any sea-going vessel beyond the miniature kind that floats in a bathtub.

Will democrats snatch defeat from the jaws of certain victory? » « The People’s Insurance Company & the Great Bailout Caper