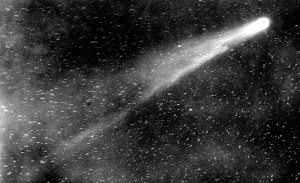 With the caveat of Kohoutek in mind, Comet ISON is shaping up to be a once in a lifetime event:

Link— Although the comet was super-faint when discovered (at magnitude 18.8, it was about 100 times dimmer than Pluto), its calculated orbit will carry it extraordinarily close to the Sun, and then a few weeks later, very close to Earth. At the end of November 2013, the comet will approach to a mere 1.1 million miles of the Sun, or 30 times closer to the Sun than the charbroiled planet Mercury. This should not quite destroy it, but instead cause much of its ices to sublimate into a spectacularly long tail, releasing trapped pebbles and dust that will also spread out for a million miles or more. Unfortunately, it will then hover only 4.4 degrees north of the Sun, and it will probably be unseen in the solar glare.

Immediately after reaching this solar near-point, or perihelion, Comet ISON heads in a direction optimally favorable for us: north. Developing an ever-greater, even-more-spectacular tail, it should be as bright as Venus, and may even cast shadows! We in the Northern Hemisphere will get the best views as Christmas approaches. Then, on January 8, 2014, the comet passes just two degrees from Polaris, the North Star, as it zooms just 37.2 million miles from Earth.

Monsters at the gate » « Evolution, the Big Bang — LIES from the Pit of Hell!