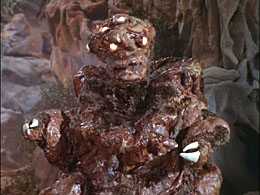 Sometimes when I hear the old ‘both sides do it’ mantra so beloved by the Beltway press, I think back to my childhood and a campy episode of Star Trek. Come on! Maybe you remember this one, The Savage Curtain, where Kirk and Spock join forces with Surak and Abe Lincoln to fend off Genghis Kahn and three more megalomaniacs who might feel right at home leading a teaparty militia?

Kirk, Spock, and friends are forced to fight the bad guys in a pocket of terrestrial conditions created just for that purpose on Excalbia, a planet of molten rock and volcanoes. The alien, Yarnek, was not quite up to mother Horta standards in terms of alien-ess. But it wasn’t half bad, especially considering the typical alien fare featured on other Star Trek episodes old and new.

Long story short, the forces of good, Kirk and friends, are pitted against evil so that Yarnek and his rock alien buddies can learn about human values. After a protracted struggle lasting almost exactly 60 minutes including commercials, in which both sides use fists, hand-made spears, and treachery, Kirk et al win the day. (Tragically, Lincoln and Surak are lost.) At which point Yarnek professes confusion.

“Your good and evil use the same methods,” it complains, and demands to know what the big difference is. Kirk asks what the bad guys were promised if they won. Yarnek answers in a deep mechanical voice, ‘what they wanted most, power.’ Kirk then responds, “You offered me my ship and the lives of my crew.”

Had Healthcare been struck down it might have been a mortal blow for Obama. In fact most of the anger over on the right isn’t because they really hate their own ideas on healthcare, it’s because they missed the kill shot. Expanding healthcare for millions of Americans under the ACA won’t cost much, by most estimates it saves money, and it’s arguably great for business: it means millions of new paying customers for the healthcare industry and the freedom to gamble on a small business for people currently chained to their dismal corporate job by the need for healthcare insurance.

But the bad guys are motivated to destroy Obama because they have convinced themselves that doing so will save  them zillions taxes, and zillions more sabotaging organized labor and clearing regulatory obstructions that stand in between them and more profit. In short, it wasn’t about healthcare per se, Obama derangement syndrome is fueled by the dollars, always the fucking dollars, for a handful of ultra wealthy people who have already have more dollars than they could ever possibly need. It was about pure, unadulterated greed for a tiny handful. If that means they have to pretend their own healthcare ideas are apocalyptic socialism, and a few million middle-class Americans have to needlessly suffer and die, fuck em. This is business.

Progressives like me wanted healthcare reform enacted so that millions of Americans would have access to life saving medical care and millions more wouldn’t be screwed by the games insurance companies play. That’s it. That’s what we won. The lives and safety of our fellow Americans. The bad guys are after what they’re always after, what they want most, more wealth and thus more power.

OK, maybe it’s a weird analogy, it’s sure not a perfect one: both sides don’t do it. One side engages in wild hyperbole and bald-faced lies way more often than the other. To the point that it’s almost all they have left. One side has to do that, because if they fessed up or took responsibility for half of their recent clusterfucks they couldn’t win dog catcher, hell they might be run of town on a rail. But sometimes I think of that campy old episode anyway, when I get wind of the both-sides-do-it crap.