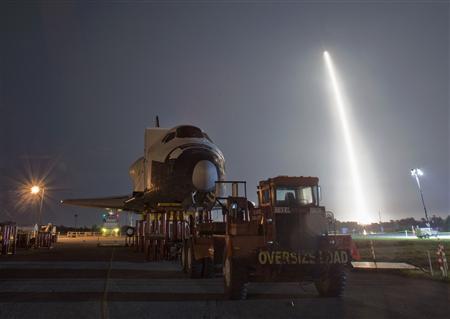 An unmanned SpaceX Falcon 9 rocket lit up early morning skies around Kennedy Space Center this morning. The booster and its Dragon spacecraft could signal a new era in more affordable space travel:

(Reuters) — Less than 10 minutes later, the rocket delivered its cargo — a Dragon capsule with 1,200 pounds (544 kg) of supplies for the station crew – into orbit.”Feels like a giant weight just came off my back,” company founder and chief executive Elon Musk posted on Twitter after Dragon deployed its solar panels, the first of several key milestones that must be met before the spacecraft is cleared to dock at the station.

NASA is counting on companies like Space Exploration Technologies, or SpaceX, to take over the task of flying cargo – and eventually astronauts – to the $100 billion space station, which orbits about 240 miles (390 km) above Earth.

BTW, SpaceX had an abort a couple of days when a sensor detected a pressure buildup in one of the rocket’s nine Merlin engines. It was hsut down after fuel had already been injected! But that’s not even the most amazing part: SpaceX engineers swapped that engine out while the rocket was on the pad in two days flat.

I interviewed Elon Musk here a year or two ago. In relate dnews, I was able to get through to some folks at the asteroid mining company, Planetary Resources, and had a nice long chat. Persistance breaks resistance folks! That post will be coming soon.