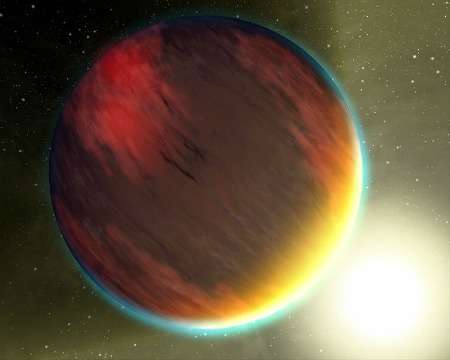 An artist's depiction of a hot Jupiter, click image for more info at wikipedia

If alien solar systems have giant planets that migrate in close to their star, there won’t be any earthlike planets farther out. At least that’s what a new survey of exosolar systems suggests:

(TG Daily) — A team led by Jason Steffen of the Fermilab Center for particle Astrophysics used data from NASA’s Kepler mission to examine hot Jupiters and look for smaller planets transiting them.And, of the 63 candidate hot Jupiter systems identified by Kepler, not one had a nearby companion planet – at least, not one big enough to be detected.

The situation’s quite different, though, when it comes to ‘hot Neptunes’ or ‘warm Jupiters’ – Jupiter-sized planets with slightly larger orbits than hot Jupiters. Of the 222 hot Neptunes, there were two with possible companions, and of the 31 warm Jupiters, there were three. “The implications of these findings are that systems with Earth-like planets formed differently than systems with hot Jupiters,” says Carnegie’s Alan Boss.

It certainly makes sense that small planets would be slung out or gobbled up as the gas giant moves in tighter and tighter. The question that always intrigued me is how those large planets would come careening in to start with, there seem to be a lot of them. Initially we could explain that as observation bias; hot Jupiter’s are easy to spot using present day exosolar planet detection methods. But these large, like Jupiter, are thought to form in a specific band, farther out from the central star, where light substances like hydrogen can collect around rocky-metal cores swaddled in volatile ices. What would cause a large world to end up orbiting the sun way inside the orbit of mercury? Here’s an idea I had after looking at the one system where we know an object has greatly changed its orbital distance: ours. 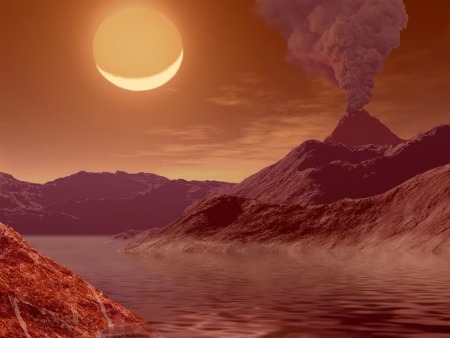 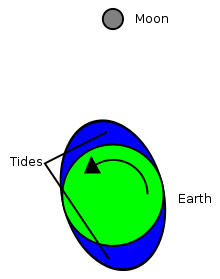 The moon orbits in the same direction the earth spins, and the earth spins way faster than the moon takes to go around, one day vs about 28 days. That means there is a tidal bulge on earth always ahead of the moon, shown in the schematic right. That extra mass pulls the moon forward in its orbit a little faster, the orbital velocity increases, and the moon moves away. The pull of the tidal bulge is tiny, the process takes a long time; it has taken four billion years plus for the moon to move to its present distance of about a quarter million miles. What would have happened if, right after the moon formed, something big hit the earth again and flipped the planet upside down? Now the dynamics would be reversed! There would be tidal bulge behind the moon, slowing it down, causing it to slowly fall in closer and closer.

We know planets can be flipped over, it happened to Venus. If Venus had a moon anything like ours early on, it would have long since crashed into the planet. The question is, can a star flip upside down? Because if that can happen early in a solar system, after a large planet has formed farther out, it could cause that world to slowly spiral in closer and closer to the parent star. The answer is I don’t know, but it might be possible, especially in the beginning, when planetoids have just finished growing big, about a 100 million years or so after the planetary disk collapses enough for large bodies to accrete.

Early formation and heavy bombardment is a chaotic time, worldlets are smashing into one another, disturbing each other’s orbits. One way a star might flip is if a sizable world hit it, the same way we believe Uranus and Venus got knocked over. If that happened big planets much farther out would slowly migrate in. In our solar system, Jupiter and then Saturn, Uranus, and Neptune — assuming they were in that order to start with which is debatable — would come marching in one by one. There would be a sort of conveyor belt, the system would always have a hot Jupiter, and we detect a lot of hot Jupiters around distant, and mostly smallish stars. Then again if we have a mechanism that smacks worldlets into a primeval star, we might not need this fanciful tale at all.

Maybe there’s some odd angular dynamics that can play out between a star’s rotation early on and the rings of debris and proto-planets forming around it. That would do the trick as far as explaining hot Jupter’s, but I have no idea if it can happen.

The only way I can think of to test the stellar flip hypothesis at all would be to know which way a star is spinning in relation to its hot Jupiter’s revolution, or be able to detect minute changes in the planet’s orbit indicating that it is reducing its orbital radius. As far as I know, we do not have that kind of accuracy and may not have it for quite a while. What do you think?