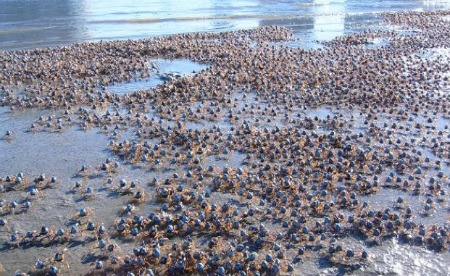 You read that right, we’re talking Arthropoda as processers here, none of those lame, squishy squidies PZ is obviously prejudiced for and certainly not some boring cloud. It turns out crab swarms are very useful in computer experiments, at least they are in this one:

(DiscNews) — Back in the 1980s two computer scientists, Edward Fredkin and Tommaso Toffoli, proposed making a computer using billiard balls. The point was to investigate the relationship between reversible processes in physics and computation. The billiard balls would be fed into a logic circuit, and the output would depend on them colliding with each other.That’s where the crabs came in. Gunji and Nishiyama decided to use the crustaceans in place of the billiard balls. One reason was that when two swarms of crabs collide, they keep going in a direction that is the sum of their velocities, just as billiard balls do. They used groups of 40 crabs to make a swarm.

They actually built AND and OR gates out of the crab population. Which is pretty clever. But to make a full-blown modern PC would take a crab population in the billions or trillions. No real practical, but I smell a possible sci-fi story! Crabs grown to digital sentience by swarm!