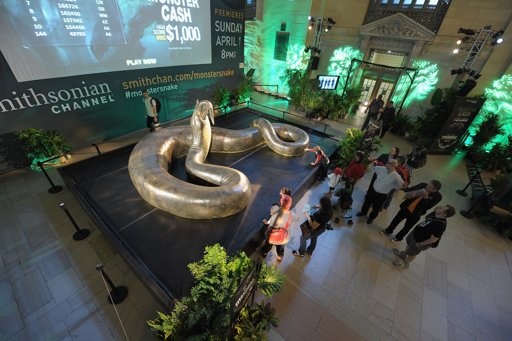 PZ may have his colorful mollusca, aka cephalopods, but here at the Zingularity we’re talking giant prehistoric snake evolution like something right out of a b-movie! Meet Titanoboa, 50 feet long and weighing over a ton. It could have gulped down an adult with room left over for the rest of the family and its close cousins were even larger and more bizarre!

(USA Today) — According to Jason Head of the University of Nebraska-Lincoln, the era’s warm climate allowed the snake to grow this large and cooling temperatures may be a possible explanation for the disappearance of the snakes. “The bigger an animal is, the higher temperature it needs to survive,” says Head, a vertebrate paleontologist who helped conduct field work at the Colombian coal mine. So is it possible for a snake of such enormity to come back into existence? Many scientists, including Head, say they would not rule out the possibility.

Snakes utilize the most unique method of locomotion of all terrestrial vertebrate clades, living or dead, and figuring out how they evolved their unusual gait and the sinuous shape that goes with it is a fascinating field in paleo-biology. It’s known that extant snakes are closely related to varanoid lizards, best exemplified by modern day Komodo Dragons and massive extinct marine carnivores called mosasaurs. But there’s nothing in the way of a transitional snake, although exactly what that would look like is anyone’s guess.

However they evolved, snakes were on the scene by the time of the K-T extinction that wiped out non avian dinos, and at least some of them made it through the ensuing bottleneck with flying colors. Titanoboa descends from one of those lucky survivors, although its immediate ancestor was probably much smaller (There is no evidence of any land species larger than a medium-sized dog making it through the K-T event, with the sole exception of the semi-aquatic crocodilians). The holotype specimens for titanoboa date to about 60 million years ago, just five million years after the dinos went into the sweet goodnight. That suggests titanoboa evolved to its large size fairly quickly.

Sixty-million years ago puts titanoboa smack dab in the middle of the Paleocene epoch. There were a few largish mammals during this time, but not many; the ice-age megafauna that would dominate grasslands and tundra did not evolve for millions of years afterward. It’s possible titanoboa made a living near watering holes, taking down early Conylarths, Mesonychids along with crocodiles, and perhaps even a few terror birds like the forerunners of the fearsome Gastornis.

Odds are the giant snakes followed the dinosaurs into extinction during a global warming event called the Paleocene Eocene Thermal Maximum beginning around 55 million years ago. Warm climes may have benefitted the titanoboa clade, but the climate shift wreaked havoc on global ecosystems, and without robust populations of larger prey to feed on, evolution would probably have selected for smaller snakes. What a pity, who wouldn’t love to see a living super-sized boa, from a safe distance anyway!

But you don’t need a time machine and you needn’t wait for the exhibit to come by to see more of this critter. Science has brought it back to life, virtually speaking, and the Smithsonian Channel is airing a special on it Sunday, April 1 at 8 PM Eastern. In the meantime they have a very cool multimedia site to whet the appetite of any young herpetologists in your family right here.