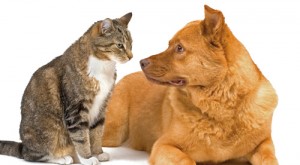 I see a little brouhaha has formed here among the godless over cats vs dogs. It’s an issue that does elicit surprisingly strong feelings among pet owners. Of course, no one can settle the question of which is better, that’s a subjective call. But we can look at why dog and cats behave so differently. We just need to start at the beginning, with a little evolution and a dash of natural history!

Cats and dogs belong to the diverse order Carnivora, made up of Canids including foxes and coyotes, Felids like lions and tigers, Ursidae like bears, Pinnipeds such as seals and walruses, Mustalids like weasels and minks, and even Procyonidae of which the best known member is the racoon or skunk. Carnivora trace their furry, warm blooded ancestry back to the mammal-like synapsids of the Permian over 250 million years ago. Something like a cute little cynodont was the ancestor of both cats and dogs and, incidentally, people. But like most mammals, the order of carnivores would have to wait until 65 million years ago, when non avian dinosaurs had exited stage left, before they could really blossom as a taxon.

Extant carnivores descend from a genera called Miacids, successful small game hunters that appear in the fossil record about 55 million years ago. It’s unknown if the Miacid ancestors of cats and dogs had already diverged by that time. But if they had they probably looked a lot more like one another than cats and dogs do today. These early Miacids were long, low slung creatures, something like the critter in the image to the left. The evolution of carnivora as reconstructed from fossil and genetic evidence is quite involved, the one below gives an idea of how and when the various lines may have split. 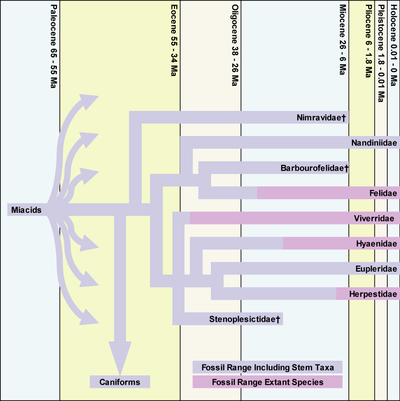 Compressing millions of years of fascinatig megafauna evolution into one sentence, by the time our earliest hominid ancestors came along a few million years ago, wolves and cats had arrived in a big way. Some of them were huge, both probably hunted our direct ancestors and close relatives. There’s a famous juvenile Australopithecine skull cap with two punctures in it that’s a dead ringer for a deep, mortal saber-tooth bite. That’s how it was for millions of years, until we went through our own evolutionary transformation and turned into the deadliest predator of all time. It was our subsequent actions on both wolves and wild cats that made them into the cute cuddly critters they are today.

There is reason to believe humans began some kind of association with wolves around 50,000 years ago and there is evidence wolves were at least partly domesticated and living side-by-side with humans by 30,000 years ago. Over thousands of years, one line of Eurasian gray wolves seems to have mostly won out — lots of inter subspecies breeding aside — and that’s the line that gave rise to lovable family mutts the world over. In part humans accomplished this by selecting for juvenile traits, a sort of permanent puppy-hood, breeding wolves that remained playful and happy in the role of beta to our alpha even as adults. More recently we’ve also bred them into a crazy array of sizes, colors, and shapes, sometimes with tragic genetic consequences, from small enough to fit into a coffee cup to the size of a small pony. They have all kinds of specialities, from sheep dogs to varmint hunters to dogs of war. As a result, dogs today rank as one the most genetically diverse, single species on earth.

Cats on the other hand have a much shorter association with humans. The common house cat appears to be a descendant of a Eurasian/African wildcat hybrid that was probably barely tamed and tolerated in the Nile delta a few thousand years before the first Pharoah was crowned. These wild cats were also selected for permanent kitten-hood so that they would tolerate or ignore us, unlike their wild ancestors which would probably flee in panick if possible or attack without mercy if cornered. They show genuine affection and interest at times, depending on the cat, but few cat lovers would argue it’s as well developed, as instantly visible, and on average as universal, as in dogs.

Because dogs were social pack animals to start with and have been breed to be, among other things, likable — the penalty for being an unlikable domesticated animal was usually harsh indeed — many times longer than cats, it’s not surprising they engage more with humans than cats, or that they’re more trainable and useful, thus more fun for people who seek interaction and maximum communication with their pet. Fifty-thousand or more dog generations vs. less than 10,000 cat generations of artificial selection makes a big difference. One difference is cats are more like a wild animal, little lions in our houses, because they’re less removed from their feral ancestors. And if that raw, independent side of nature is what you like in a pet, then you’re probably a cat person.

Now, if cats had been worked over by humans for 50,000 years like wolves were, we’d probably have house cats the size of Black Labs down to the size of lab rats with similar degrees of trainability, loyalty, and interaction. Cats with all manner of manes and stripes and coats. They would make for more interesting companions imo, certainly more flexible farm and ranch helpers, and they’d surely be wickedly bad ass guard animals. Can you picture the fate of any poor burglar who broke into a house inhabited by the loyal family guard tiger?

However they came to be and whichever you prefer, there’s no doubt cats and dogs have become our best friends in the animal kingdom hands down. The partnership we have struck with these adorable, furry creatures has worked out wonderfully for all three species. Cats and dogs are now so numerous and widely distributed that they have a big evolutionary edge for survival far into an unpredictable future. Most importantly, in the here and now, they offer us a level of reliable comfort and companionship most human beings would be hard pressed to match, all for the bargain price of a bowl of tap water and cheap food, a few scratches behind the ears, and an occasional treat.

College does not make you less religious, just less ignorant » « Master of my own domain