ProPublica’s investigative reporter Alec McGillis has been following the predatory practices of Trump son-in-law Jared Kushner that have earned him the label of being a slumlord. Kushner’s real-estate company would engage in deceptive practices, provide shoddy apartments, fail to make urgent repairs, and harass tenants with debt collection and eviction lawsuits even during the pandemic. ( I wrote about this last year. )

McGillis has a new report out that a judge has ruled that the Kushner companies violated multiple laws with their practices. The Maryland attorney general brought the lawsuit as a result of increased awareness created by ProPublica’s reporting.
END_OF_DOCUMENT_TOKEN_TO_BE_REPLACED

These days we are awash in conspiracy theories. This old clip from the sketch comedy show That Mitchell and Webb Look imagines what the people who succumb to these theories must actually believe.

I was recently watching the TV series Marple (2013) based on the stories of Agatha Christie and one episode A Caribbean Mystery had her on holiday on an island in that region. One evening she is seated for a lecture on tropical birds next to a dapper visitor from Jamaica who introduces himself to her as Ian Fleming. When she asks him what he does, he says that he is working on a novel but is stuck on finding a good name for his lead character. At that point, the ornithologist speaker begins his lecture by saying “Good evening, my name is Bond, James Bond.” Fleming quickly takes out his notebook and jots something down.

The Fleming character disappeared after that so it is clear that the writers inserted him into the show purely for that one joke but I was curious whether there was some truth to it and it turns out that there is.

The name James Bond came from that of the American ornithologist James Bond, a Caribbean bird expert and author of the definitive field guide Birds of the West Indies. Fleming, a keen birdwatcher himself, had a copy of Bond’s guide and he later explained to the ornithologist’s wife that “It struck me that this brief, unromantic, Anglo-Saxon and yet very masculine name was just what I needed, and so a second James Bond was born”.
…

On another occasion, Fleming said: “I wanted the simplest, dullest, plainest-sounding name I could find, ‘James Bond’ was much better than something more interesting, like ‘Peregrine Carruthers’. Exotic things would happen to and around him, but he would be a neutral figure—an anonymous, blunt instrument wielded by a government department.”

That plain name, and the way it is said, has become iconic.

When a social affliction affects only the poor or people of color, it tends to be either ignored or treated cursorily. But as soon as the same affliction hits white people, it suddenly becomes worthy of study by social scientists and lead to calls for finding solutions. We saw this with the drug epidemic. As long as the problem of drug abuse was seen as mainly in the black community in the form of marijuana or crack cocaine, the reaction was harsh policing and punitive jail sentences, leading to the massive overcrowding of prisons and the ruination of lives and families, not to mention the numerous killings of black men by police where the initial interaction was caused by the police stopping and searching them for drugs. But when the opioid epidemic hit that largely affected white people, we have seen more humane approaches being taken, with an understanding that drug use is more a health problem than a criminal problem.
END_OF_DOCUMENT_TOKEN_TO_BE_REPLACED

I am fond of the card game bridge, growing up in a bridge playing family and returning to it in retirement and playing a couple of times per week at my local club, formerly in person and now online. I enjoy the intellectual challenge posed by the game but never forget that it is a game and not worth getting all worked up about.

But many of the people who play it are severely competitive and I wrote about a recent cheating scandal involving a Grand Life Master. I just read of a new documentary just released called Dirty Tricks about the big 2015 scandal that rocked the world of bridge involving Lotan Fisher, someone considered the Michael Jordan of the game who possessed exceptional skills. He and his partner Ron Schwartz won millions of dollars playing in tournaments and with wealthy players like Bill Gates and Warren Buffett.
END_OF_DOCUMENT_TOKEN_TO_BE_REPLACED

The rapid development of the vaccines to prevent covid-19 has to be considered a massive scientific success because creating such things usually take a long time. You would think that that was the biggest hurdle in combating the pandemic and that after that was achieved, the rest would be smooth sailing, with everyone getting vaccinated and the spread of the disease brought under control. And yet getting enough people get the vaccine to achieve herd immunity is turning out to be the hardest part, a situation that I would not have thought possible when the outbreak was causing panic back in the first half of 2020.

And yet that is where we are.
END_OF_DOCUMENT_TOKEN_TO_BE_REPLACED

I have discussed before the increased trend towards color-blind casting of films and TV shows, which I see more in British productions than in American ones, along with the related issue of cultural appropriation.

In general, I favor color-blind casting and have got used to it. To see people of color playing roles where they would not normally be seen in such positions, such as the aristocracy in costume dramas of a bygone period, seems increasingly unexceptional to me.

But I started to wonder if by having such portrayals, we might be inadvertently downplaying the racist repression that existed in those times. For example, in the TV series Bridgerton, people of color play lords and ladies in England a couple of centuries ago which is not even remotely close to reality. Would some viewers leave with the impression that this was the reality of those days?

It would seem that one would have to be massively ignorant of history to fall into such a way of thinking but given that there are reportedly people who think that humans lived alongside dinosaurs because they are portrayed that way in the cartoon show The Flintstones, one cannot totally discount the possibility.

Matt Simon writes that airports have lots of open spaces and big buildings that are never in shadow, which would make them perfect places to locate solar panel arrays. It would be much easier and provide a bigger return than an equal area spread out over residential roofs. For example, Denver International Airport has 53 square miles of usable space, enough to provide up to 30% of its annual energy needs and, on sunny days, all of it.
END_OF_DOCUMENT_TOKEN_TO_BE_REPLACED 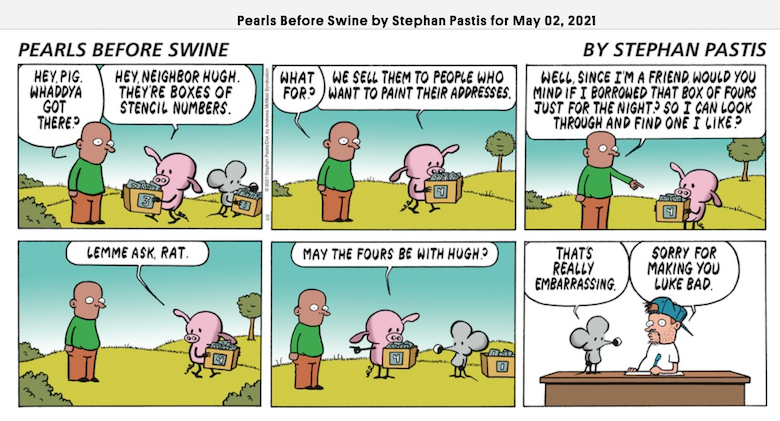 When I wrote about the funny TV show Ted Lasso, some readers expressed regret that they do not subscribe to Apple TV+, the only. place where you can see it. This raises a problem that I think is going to get more acute with time, and that is that we may be entering a world where certain films and TV shows will be inaccessible to some segment of the population.

It used to be simpler, at least when it came to films. Films were released in theaters and if you missed it on its first run, you waited until it was released in some video form that you could rent it fairly cheaply from your neighborhood video store or borrow from your public library. You were guaranteed some form of easy access to all films. But now film makers and distributors have another option and that is to create their own subscription streaming service to show their own shows. So now in addition to Apple TV+, we have Disney+, Amazon Prime, HBO Max, Paramount+ and many more. This website tells you where you can find a particular film or TV show to stream.
END_OF_DOCUMENT_TOKEN_TO_BE_REPLACED