The Delta variant of the SARS-CoV-2 virus is now rapidly becoming the dominant strain. This variant is more easily transmissible and more dangerous, and Dhruv Kullar warns that from the evidence gained so far from the UK, it poses a greater risk to the unvaccinated.

Earlier this year, scientists estimated that lineage B.1.1.7-the Alpha variant, first isolated in England-could be some sixty per cent more transmissible than the original version of sars-CoV-2. Now experts believe that the Delta variant is sixty per cent more transmissible than Alpha-making it far more contagious than the virus that tore through the world in 2020. It hasn’t yet been conclusively shown that Delta is more lethal, but early evidence from the U.K. suggests that, compared to Alpha, it doubles the risk of a person’s being hospitalized. Even if the variant turns out to be no deadlier within any one person, its greater transmissibility means that it can inflict far more damage across a population, depending on how many people remain unvaccinated when it strikes.

For awhile, it seemed like in the US there was not much difference in the Covid-19 infection and death rates between those areas which had high vaccination rates and those that had low, leading some vaccine hesitant people to conclude that it was not really necessary and that they could ride out the pandemic. But that picture has now changed and low vaccination areas are seeing higher infection rates now. It is not clear if that was simply a time lag factor or because of the arrival of Delta variant.

In his newsletter (no link, unfortunately), New York Times reporter David Leonhardt lays out the statistics in a couple of charts. The first chart looks at the number of new cases, comparing counties according the share of residents who have been fully vaccinated. 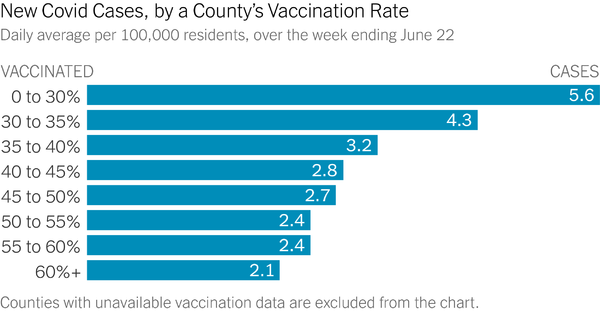 He says, “A month ago, a chart like this would have looked almost random, with little relationship between caseloads and vaccination rates. Now, there is a clear relationship.”

While it is still early days to see what the causal relationship may be, there are some hints.

One likely explanation is that vaccination rates have risen high enough in some communities to crush the spread of Covid. In the spring, these places were still coping with significant outbreaks, but they aren’t anymore.

In Marin County, just over the Golden Gate Bridge from San Francisco, for instance, more than 90 percent of people aged 12 and above have received at least one shot. As a result, Marin has virtually extinguished the virus, with only three new confirmed cases per day in recent weeks.

A second explanation for the new divergence between more and less vaccinated places is the Delta variant. It appears to be making vaccination even more valuable. The vaccines are effective against Delta, sharply reducing the chances of infection and nearly eliminating any chance of serious illness. For unvaccinated people, however, Delta is significantly more contagious than earlier variants.

Missouri offers the clearest example. Over the past week, it has reported more new Covid cases per capita than any other state, and they are concentrated in rural areas that have low vaccination rates, as Charles Gaba, a health care analyst, has noted. In the parts of the state with high vaccination rates – like the metro areas of Kansas City, St. Louis and Columbia – the number of new cases remains very low.

Now see what happens when one organizes the data according to the votes in the 2020 election. 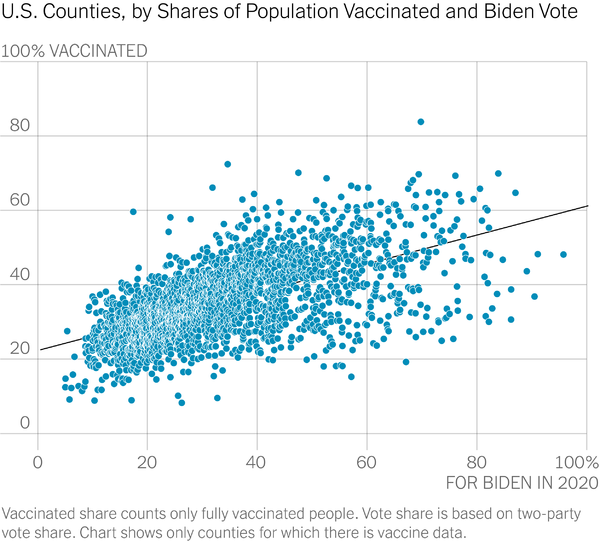 No wonder, then, that the number of new cases keeps falling in Biden counties, while it has begun to rise in Trump counties.

What I find particularly maddening is how a public health problem and solution that should be utterly apolitical has become so polarized by political loyalties in the US. This can be laid squarely at the feet of Trump and his supporters in the right wing media ecosphere who have made this into a partisan issue.

Is that also the case in other countries? I have not done an exhaustive survey but based on my family and friends in Sri Lanka, UK, Australia, and New Zealand, the US is alone in this kind of lunacy. As far as I am aware, in the UK, for example, both Labour and Conservative parties are very pro-vaccination.

Whatever one’s political views, public health should come first. I wish Republicans would get with the vaccination program. They have locked themselves into an untenable position where they may fear losing face if they suddenly switch. I don’t know what it will take for them to change their anti-vaccination stance. Massive sickness, hospitalizations, and deaths among the people they claim to represent? It would be so tragic and so unnecessary.