Crashes and pileups at the Tour de France are not that rare. This is not surprising since we have riders going at high speeds while bunched close together and weaving in and out and even the most skillful riders can occasionally make a wrong move that causes a crash. Last year the Tour de France was held with fewer spectators lining the streets because of covid-19 restrictions. This year the crowds were back in full force but the presence of one particular fan caused a massive pile up of riders. 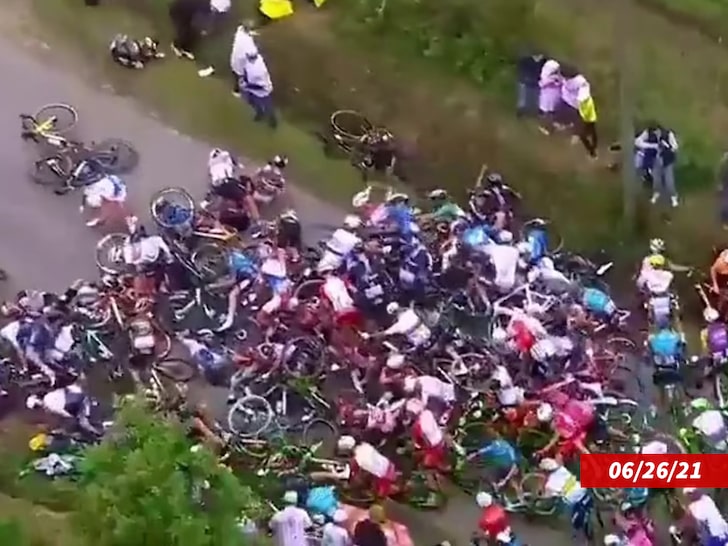 It was caused by this fan standing by the road who then moved slightly onto to the road so that a sign that she had apparently made for her grandparents would get on TV.

in an attempt to get a cardboard sign on tv, a spectator has taken out the entire peloton – maddening #TourDeFrance2021

It is lucky that no one died.

One rider, Jasha Sutterlin, was s injured and had to pull out of the race. Several others were hurt, including spectators. Among the ones that were hurt were Italy’s Sonny Colbrelli and Dutch rider Wout van Aert, both of whom looked as favorites to win the first leg of the race but suffered delays after they fell over. The rider who eventually won, Julian Alaphilippe, did so with blood dripping from his knee. “I hope everyone is OK. I’m calling on the fans to be careful. It’s nice to see the fans back on the side of the road, but please be careful,” Alaphilippe said.

If Tour de France is going to sue the spectator though officials will first have to find her. As of Sunday, police in France were still looking for the spectator who fled the scene after the crash.

For some reason, people will do all manner of things in order to just be briefly caught on TV for about one second. I am not sure what the appeal is that she would go to the trouble of carting around a sign and trying to position herself for the camera for at most a fleeting ppearance, if she is lucky. Although the woman fled the scene, authorities will undoubtedly be able to track her down from the video with the help of internet sleuths, just the way that so may January 6th insurrectionists were identified.

I have no idea of the complex scoring rules in this multi-day event but I enjoyed watching the highlights of last year’s Tour de France.