A recent Gallup poll shows that the number of people who belong to a church, mosque or synagogue is dropping rapidly and that this may be due to a reaction to aggressive Christian nationalist politics. (Thanks to reader Jeff for then link.)

Just 47% of the US population are members of a church, mosque or synagogue, according to a survey by Gallup, down from 70% two decades ago – in part a result of millennials turning away from religion but also, experts say, a reaction to the swirling mix of rightwing politics and Christianity pursued by the Republican party.

The evidence comes as Republicans in some states have pursued extreme “Christian nationalist” policies, attempting to force their version of Christianity on an increasingly uninterested public.

Some of the decline is attributable to changing generations, with about 66% of people born before 1946 are still members of a church, compared with just 36% of millennials.

“Surveys of those who identify with Christian nationalist beliefs consistently show that this group feels that they are subject to more discrimination and marginalization than any other group in society, including Islamic people, Black people, atheists, [and] Jewish people,” Gill said.

“They are experiencing their loss of prominence in American culture as an unacceptable attack on their beliefs – and this is driving much of the efforts we are seeing to cling on to power, undermine democracy, and fight for ‘religious freedom’ protections that apply only to them.”

One of the biggest threats to a society is when a dominant majority starts to believe that they are a persecuted minority, because they still wield power and are emboldened to use it against those whom they feel are threatening their dominance. They thus get to feel a sense of righteous indignation even as they engage in actions that are by no means righteous.

Meanwhile, God-Man is puzzled about what these repeated calls for ‘thoughts and prayers’ are really asking for. 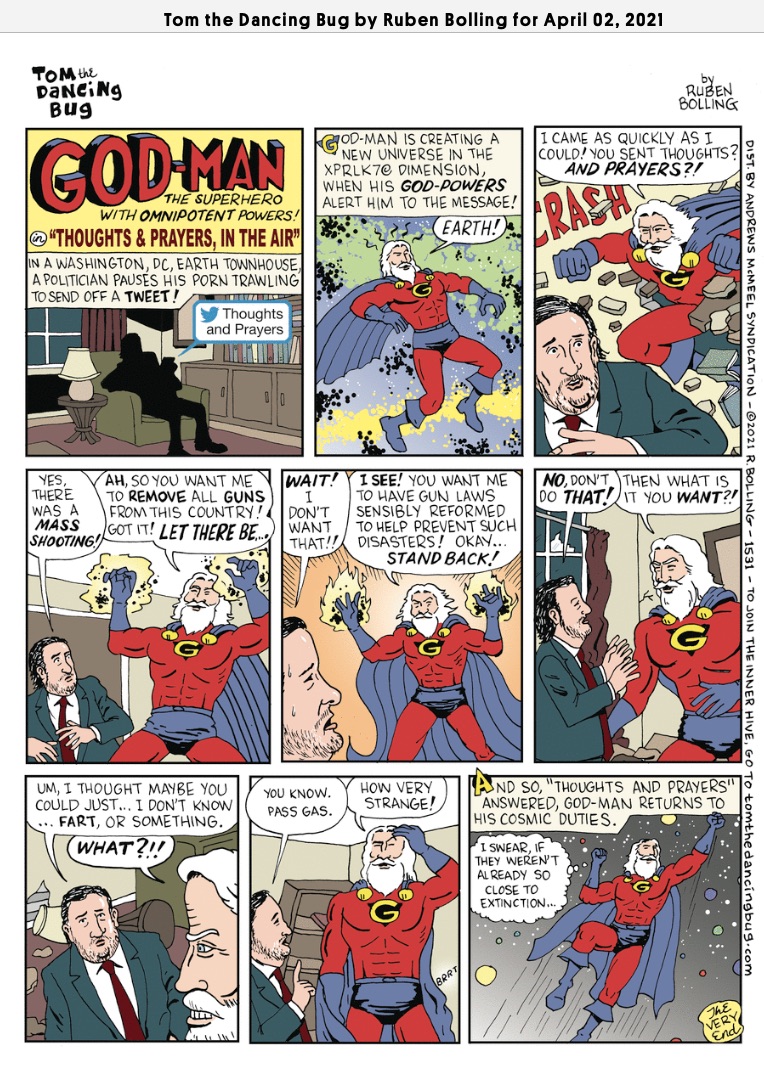