I was not sure what would await me from my brief hiatus from blogging when I started following the news closely again. I did not expect to anything as wild as the story involving Matt Gaetz. For those not familiar with him, he is a MAGA-loving Florida congressperson, one of Trump’s most ardent supporters and considered a rising star in Republican circles, who looks like one of those used-car salespersons on late-night TV. Or an extra from the film Grease, what with his high head of slicked black hair. One expects him, Travolta-like, to whip a comb out of pocket and use it whenever he sees himself in any reflecting surface. 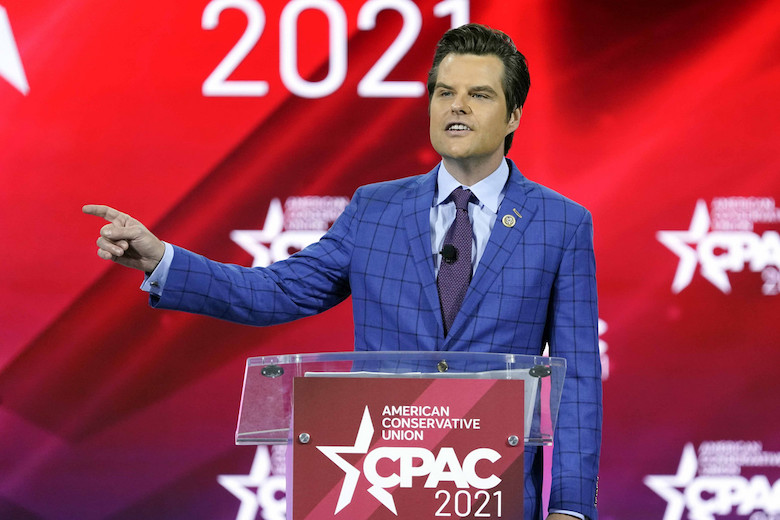 Anyway, the bare bones of the story involve multiple threads. One is the charge that there is a federal investigation that he engaged in sex with an underage girl and that he took her across state line for this purpose, which would constitute sex trafficking. The other is that his wealthy father Don Gaetz was being extorted for $25 million with the promise that if he paid up, they could get the investigation into his son dropped. The third is the wildest and it involves Robert Levinson, an American who went missing in Iran in 2007, is believed to have been held on espionage charges, and is now thought by his family to be dead. The alleged extortioners supposedly claimed to have evidence that Levinson is still alive and wanted the money to engineer his escape. They said that Matt Gaetz would be on the plane bringing Levinson home and thus would be hailed as a hero and would get a presidential pardon. If they were successful, they would also get the reward of $25 million that the US government has offered for securing Levinson’s release and they would repay the extorted money. Hence they referred to the money they were demanding as a ‘loan’.

One of the people is named in the plot is David McGee, a former federal prosecutor who is now a lawyer in private practice and who represents the Levinson family. McGee has denied any involvement in this hare-brained scheme. The other person is a former Air Force intelligence officer Bob Kent. Gaetz says his father had, at the request of the authorities, been wearing a wire when he met with the extortioners. What is also interesting is that Gaetz is not following the usual lawyerly advice of denying any wrongdoing and then refusing to comment further while his lawyers sort things out. Instead he has been all over the media giving interviews to Fox News, Politico, and Axios among others.

The conservative Washington Examiner newspaper has provided some of the most detailed accounts using documentation that it seems to have obtained from the Gaetz family. For example, here is the first of a three-page document titled Project Homecoming said to be from Kent to the Gaetz family outlining the details of the plan. 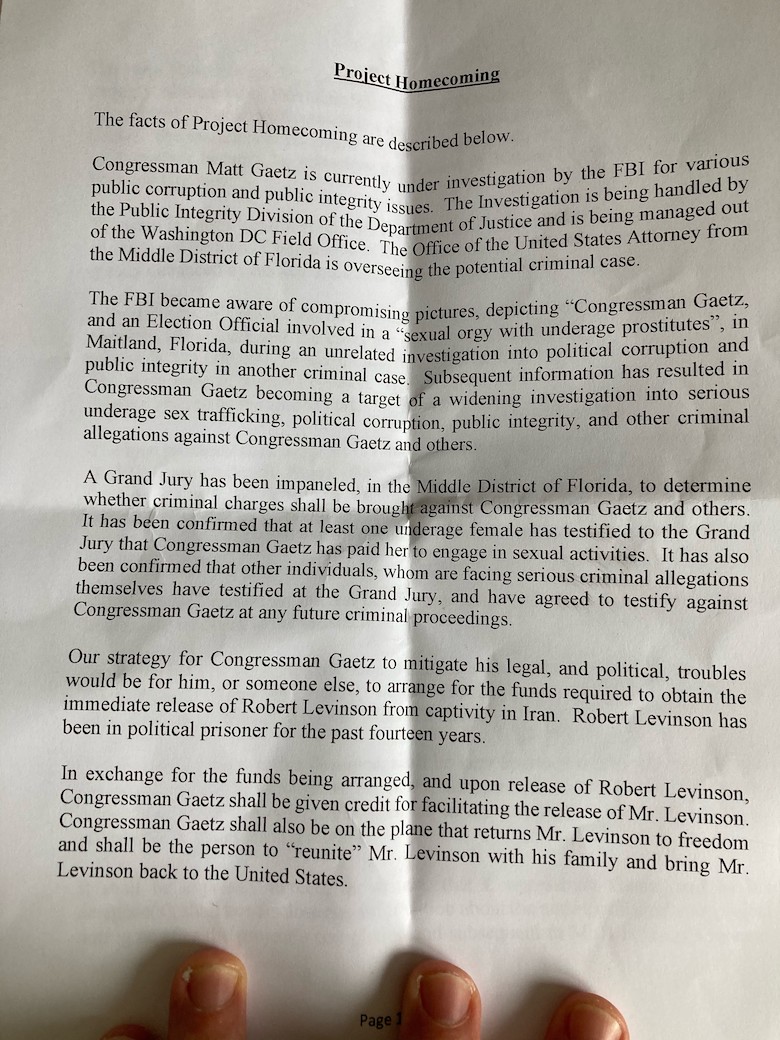 You can see the other two pages and more documents provided to the newspaper, such as screenshots of texts sent by Kent to the elder Gaetz, here.

I admit that I am a stranger to the world of extortion and international intrigue but I am surprised that people engaged in them would be so, well, bureaucratic, and issue written memoranda outlining their plans. Isn’t plausible deniability taught in Spycraft 101 anymore?

The website TalkingPointsMemo has been doing a deep dive into this fascinating story and has various posts on it. This one lists and identifies some of the key players, including those not mentioned above. This one has comments from FBI officials puzzled by elements of Gaetz’s story. This one says that this case reveals a world of true believers and grifters and who have latched onto the Levinson case, attracted by the government reward.

[I]t brings in a group of people claiming to be devoted to the cause of returning Levinson to the U.S. Matt Gaetz and his father, Don, have described a story in which these individuals heard the younger Gaetz was in trouble, knew that he had family money, and saw an opportunity where the sane did not: allegedly blackmailing Gaetz into financing a last-ditch effort to rescue Levinson.

The alleged scheme introduces a cast of characters and a general sense of absurdity which, some former FBI agents pointed out to TPM on Wednesday, heightens questions about why the Gaetz family took the supposed plot so seriously.

Reporting from the Washington Examiner suggests that the plot centers around a former Air Force Captain named Bob Kent.

Kent reportedly approached Don Gaetz, the congressman’s father, with an offer to finance a rescue mission to retrieve Levinson from Iran. The U.S. government is currently offering a $25 million reward for Levinson’s return, though he is believed to be dead. The Gaetz payment would supposedly be repaid through the U.S. government reward.

Kent himself has a Linkedin profile designed to leave you with the impression that he is some kind of high-level operator in the world of intelligence and subterfuge. He describes his role in the Air Force as a “special tactics/intelligence officer,” and says on the profile that he has spent time working in the middle east, also on intelligence issues.

But a Newsweek profile of the hunt for Levinson by Jeff Stein suggests that Kent is part of a group of people comprised of those who have become “obsessed” with the Levinson case and those who are seeking to cash in on the big federal reward available for his return. The profile describes Kent somewhat frantically trying to secure funds for Levinson’s release.

The whole thing reads like a badly written spy novel, which probably means that it will become a badly made spy film. Unless it is made into a comedy, in which case it has a chance of being good.

Cleveland baseball team distances itself from racist caricatures » « Thank you