When I wrote on Friday that last week was terrible for Trump, I had no idea that the worst (best?) was yet to come. Because yesterday we saw two more debacles.

First we had the fiasco of the firing of Geoffrey Berman, the US Attorney for the Southern District of New York, in what was clearly an act designed to get rid of someone who was conducting investigations that were likely getting too close for comfort to Trump, his family, and his cronies.

And then yesterday’s rally in Tulsa that Trump had been salivating over as the chance to get on top of things by riling up his rabid base with his racist, jingoistic rhetoric, out to be a damp squib. The Trump campaign had even built an outdoor stage so that Trump and Pence could address the expected huge overflow crowds before the main event. The rhetoric was on display for two hours but the crowd was not. The massive crowd that he had predicted failed to materialize. The stadium has a capacity of just 19,000 people but was nowhere near capacity. As a final indignity, the outdoor stage was dismantled even before the rally ended. 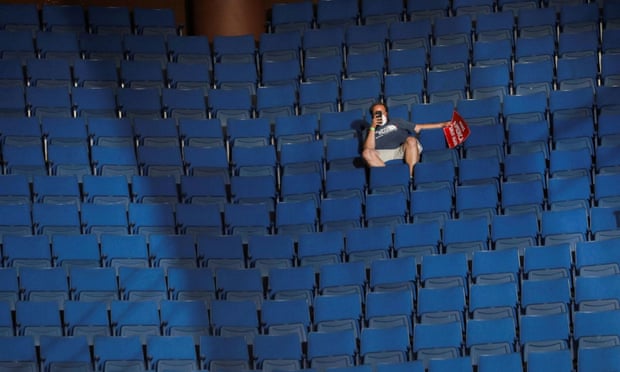 Donald Trump supporter shoots a video with his mobile phone from the sparsely filled upper decks of the arena at Trump rally in Tulsa, Oklahoma, Saturday. Photograph: Leah Millis/Reuters

The US president’s much hyped return to the campaign trail turned to humiliation when he failed to fill a 19,000-capacity arena in the Republican stronghold of Oklahoma, raising fresh doubts about his chances of winning re-election.
…

The overwhelmingly white gathering at Trump’s first rally since March was dwarfed by the huge multiracial crowds that have marched for Black Lives Matter across the country in recent weeks, reinforcing criticism that the president is badly out of step with the national mood.
…

First, Trump’s planned speech to an overflow event outside the venue was cancelled due to lack of attendance. Cable news networks showed a “Trump” lectern standing idle as workers dismantled a stage.

Then the rally venue itself was estimated to be only two-thirds full, with numerous empty seats in the upper tier and empty space on the area floor, despite his campaign having claimed that it received more than a million ticket requests. One explanation for the disconnect spread rapidly online as Twitter users suggested many of the requests were fakes filed by bored teens and even fans of Korean pop music playing a prank on the US president.
…

The low turnout will be a blow to Trump, whose campaign reportedly saw it as a way to revive his flagging spirits amid slumping poll numbers. The president had said last Monday: ” We’ve never had an empty seat. And we certainly won’t in Oklahoma.”
…

The Trump campaign separately claimed that protesters interfered with the president’s supporters, even blocking access to the metal detectors, which prevented people from entering the rally. But multiple reporters on the ground saw no evidence of this.

In public, Trump will lie about the number of empty seats, like the way he lied about his inauguration crowds. Who are you going to believe, Trump or the lying eyes of people present who took so many photographs and have circulated them widely? In fact, just this morning I got an email from the Trump campaign saying, “Despite the Democrats’ best efforts to STOP us, we held the most EPIC Rally EVER with THOUSANDS of real American Patriots.” It was kind of pathetic that he could not claim that there were ‘hundreds of thousands’ or even ‘tens of thousands’ and could only merely capitalize the words ‘thousands’, as if that made the number itself larger.

Or he may make some excuse for the low turnout, such as blaming Antifa or China or covid-19 because why not? It appears that pranksters may have been responsible for creating the high expectations of a massive crowd, and the Trump campaign may have fallen for it.

K-pop fans and users of TikTok claimed tickets to Donald Trump’s Saturday night rally in Tulsa then did not use them, as part of a coordinated effort which helped to leave hundreds of seats empty in a 19,000-capacity venue.

As reported by the New York Times, the scheme stemmed from a 11 June tweet from the Trump campaign promoting free registration online and via cellphones. The scheme exploded on the TikTok app, where young users implored followers to join in.
…

As Trump and his campaign gloated that more than a million tickets had been requested, on TikTok, young people shared screenshots of themselves using Tulsa-area zip codes to reserve seats with no intention of showing up.

“It spread mostly through Alt TikTok, we kept it on the quiet side where people do pranks and a lot of activism,” one user told the Times.

Brad Parscale, Trump’s campaign manager who has been hailed in some circles as some kind of digital media genius, seems to have been caught flat-footed by these pranksters and is clearly embarrassed by it and is trying to pin the blame elsewhere.

“You just got rocked,” she said, “by teens on TikTok who … tricked you into believing a million people wanted your white supremacist open mic enough to pack an arena during Covid.

“KPop allies, we see and appreciate your contributions in the fight for justice.”

Parscale’s explanation would not explain the lack of people in the overflow area.

CNN has a detailed report on how the Tulsa event, that Trump had expected would be a blockbuster restart to his campaign, became a debacle, and how Trump reacted as the bad news kept coming in yesterday.

You can bet that this humiliation will really sting Trump because for this narcissist, huge crowds at his rallies provide him with the validation he desperate needs that people love him. He will lash out at his aides and his advance people for not getting enough people to even fill the stadium, let alone an overflow area.