If the Trump administration were not so corrupt, dangerous, and harmful to so many people, their sheer incompetence would be laughable. Take for example their attempt to fire the Geoffrey Berman, US Attorney for the Southern District of New York. Attorney General William Barr announced at 9:00 pm on Friday night that Berman was “stepping down” effective immediately and thanked him for his “tenacity and savvy” while in the office he had led since 2018. The timing of the announcement immediately raised suspicions that this was another of the notorious ‘Friday night news dumps’ which administrations use to avoid media scrutiny of dubious actions.

Berman had prosecuted and convicted former Trump’ lawyer and fixer Michael Cohen, had indicted two aides to Trump’s current lawyer Rudy Giuliani, and was investigating Giuliani too. Berman was also the one who orchestrated the arrest of Trump’s predator pedophile buddy Jeffrey Epstein as soon as he landed at an airport in New Jersey when returning from an overseas trip. His office had managed to keep the arrest plans secret because if Epstein had got wind that he was to be arrested, he would never have returned to the US since he had stashed fake passports and money overseas. Berman also successfully fought against bail for Epstein as a flight risk. His office is currently investigating Epstein’s associates as well. It is quite possible that Berman is also investigating Trump, his family, and his cronies because their venality is so blatant and so the idea that Barr was getting rid of a dangerous threat was immediately raised.

That feeling was accentuated when just two hours later, Berman said that he had not resigned and had no intention of doing so and indeed he arrived to work on Saturday morning. It turns out that Barr does not have the power to fire a US Attorney because he is appointed by the president, and only the president can remove him. So on Saturday, Barr claimed in a letter to Berman that Trump had indeed officially fired Berman. But when Trump was asked about it later that day, he said that he was “not involved” in this matter and that the firing of Berman was up to Barr. Barr had been caught in two back-to-back lies. So the person who occupies the highest law enforcement office in the country turns out to be as shameless a liar as his boss. These people cannot even coordinate their lying with each other.

Berman said that he would only step down when a replacement is confirmed by the US senate. This has immediately raised some interesting legal issues. While Trump does normally have the power to fire US Attorneys since he is the one who appoints them, the situation here is a little more complicated since Berman was not appointed by Trump. This is because after Berman’s predecessor in office Preet Bharara was fired by Trump in 2017, Berman was put in the office in an ‘interim’ capacity by former aattoney general Jeff Sessions but was never confirmed by the senate and this leads to a legal dilemma.

Trump never nominated a US attorney to replace Bharara. Instead, Sessions announced in January 2018 that he had appointed Berman as “interim” US attorney. Under federal law, the attorney general has the power to do this, but there are limits — an “interim” appointment expires either when a presidentially-appointed official is confirmed by the Senate, or after 120 days.

If the 120-day period runs out and there’s no Senate-confirmed official, the federal district court for that US attorney office can appoint a US attorney. Federal law says that a court-appointed US attorney — like Berman — serves “until the vacancy is filled.” Meanwhile, a separate section of the US Code that lays out the process for presidentially-appointed US attorneys states that, “Each United States attorney is subject to removal by the President.”

Here is the 2018 appointment letter from the US District Court for the Southern District of New York that was produced by Berman that says explicitly that the court has the power to appoint a permanent US attorney once the 120-day interim period expired and that they were appointing Berman to the post. 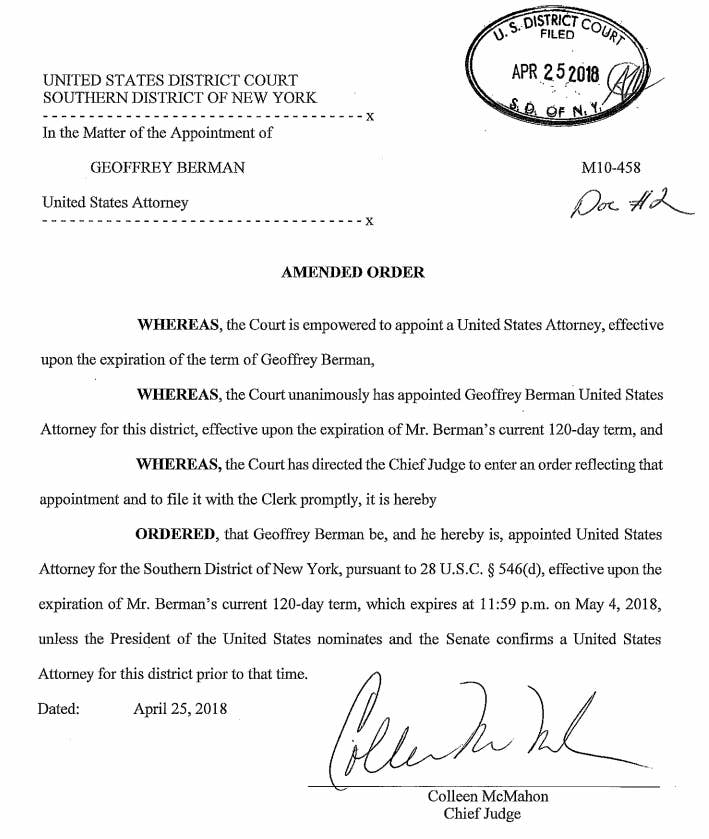 So basically Berman was appointed by the court, not by Trump. If Berman fights his firing, the courts will have to weigh in.

Berman appeared to disagree with Barr and Trump about how these two provisions work together. Berman’s statement on Friday night made clear that he believes the president can’t remove a court-appointed US attorney, and that only a Senate-confirmed official can take his place.
…

So once again the Trump administration’s ‘arbitrary and capricious’ actions (to quote chief justice John Robert’s words in the DACA case) has created yet another legal mess that the courts will have to sort out.

UPDATE: It appears that Berman has decided to resign after all. Too bad. I am sure that he has his reasons but it would have been nice to drag this fight out.

The reason may be that he extracted a concession from Barr.

Though Barr had said Friday that he would install Craig Carpenito, a person close to Barr who is now the US attorney in New Jersey, to serve as Berman’s acting replacement, the attorney general’s letter Saturday noted that “by operation of law,” Berman’s current deputy, Audrey Strauss, will become acting US attorney.

“I anticipate that she will serve in that capacity until a permanent successor is in place,” Barr wrote.

Berman’s strategy of refusing to resign paid off for his former office. In a victory lap, Berman said he was leaving “In light of Attorney General Barr’s decision to respect the normal operation of law” by appointing Strauss.

The move was viewed as a win for SDNY, where prosecutors had become uneasy over the prospect of a new leader viewed as loyal to Barr.

Berman’s 18-hour hold-out appeared to force Barr to walk back his initial plan to appoint Carpenito. It isn’t clear why Barr changed course but his appointment of Strauss proved enough for Berman to step down.

“After all this what did they gain by getting rid of Berman? Nothing,” said one former SDNY prosecutor of Barr.

Primary races to watch on Tuesday » « Great moments in driving