Those wacky Satanists are at it again in their efforts to maintain the separation of church and state, targeting the inane practice of some legislatures to post monuments to the Ten Commandments on public grounds. Some people think that the lack of public religiosity is the cause of America’s descent into immorality and that reminding people about what their god expects of them will make their behavior better. There is so much that is obviously wrong with that view that I will not waste time dealing with it.

But the Satanists, rather than try and get the religious monuments removed through legal action, instead take the tack of planting their own religious symbol next to the monuments, on the principle that sauce for the goose is sauce for thee gander and that if people think that public religiosity is needed then the more the merrier. Arkansas is the latest battleground.

The Satanic Temple temporarily placed a bronze statue of a goat-headed, winged creature called Baphomet at the Arkansas State Capitol during a rally to call for the removal of a Ten Commandments monument already mounted on Capitol grounds.

About 150 Satanists, atheists and Christians attended the First Amendment rally Thursday. The Satanic Temple says the Ten Commandments monument violates constitutional freedom of religion rights and that the installation of their 7 1/2-foot-tall statue showing the 14th century idol seated and accompanied by smiling children would demonstrate religious tolerance.

“If you’re going to have one religious monument up then it should be open to others, and if you don’t agree with that then let’s just not have any at all,” said Satanic Arkansas cofounder Ivy Forrester, a rally organizer.

You have to admit that the statue of Baphomet is pretty impressive. 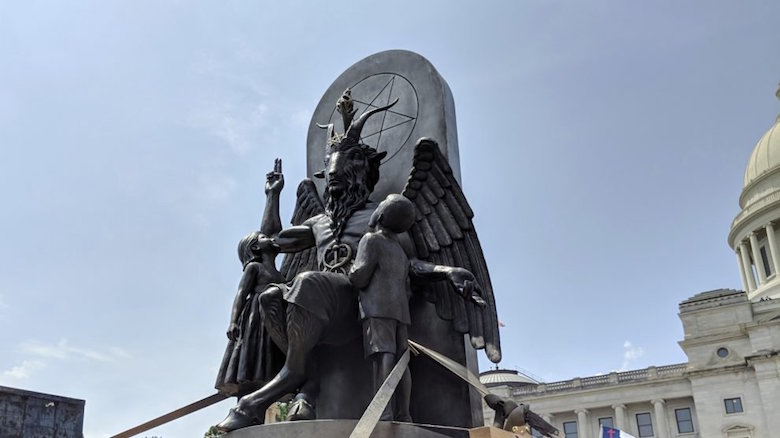 You can see the rally that accompanied the arrival of Baphomet and a bit of the speech by spokesperson Lucien Greaves of the Satanic Temple.

This tactic had been used in Oklahoma earlier but Arkansas tried to circumvent it by passing a law in 2017 that required legislative sponsorship to install a monument, knowing that the Satanists would be unable to find a legislator willing to do this.

But as you can imagine, even the temporary arrival of Baphomet resulted in the usual fun and games.

At a counterprotest a day prior to the rally, opponents of the Satanic Temple held signs bearing phrases like “Blasphemy is not free speech,” “Satan has NO rights,” and “Honk for Jesus.”
…

Meanwhile, Arkansas Republican and state Sen. Jason Rapert, a minister and lead sponsor of the law allowing the Ten Commandments monument, called the Satanic Temple rallygoers “outside extremists” and “pranksters” who “promote the profane.”

Despite the Baphomet statue, members of the Satanic Temple, which is headquartered in Salem, Massachusetts, don’t worship any deity. They consider themselves “compassionate” humanists who believe in science. The Satanic Temple’s mission is to “encourage benevolence and empathy among all people, reject tyrannical authority [and] advocate practical common sense and justice,” according to its website.

The ACLU has already filed a lawsuit against the Ten Commandments monument in Arkansas and, given the past record in other states, will likely win again.