Her correspondent Michael Rubens tries to understand why Republicans are so infatuated with tax cuts for the rich and with economist Arthur Laffer’s theory that such cuts will lead to massive economic growth.

As Rubens points out, Sam Brownback ran this exact experiment as governor of Kansas and the result has been a disaster for the state’s economy, as even the heavily Republican legislature there acknowledges. But Brownback, now like New Jersey’s Chris Christie one of the least popular governors in the country, is leaving it to someone else to clean up the mess he created and is bailing out before the mobs come after him. He has accepted Donald Trump’s offer to head the Office of International Religious Freedom in the State Department, an office that must be one of the most obscure and useless in the government. His “mission would be to monitor and respond to threats to religious freedom around the world.” In other words, do nothing but make speeches even though nobody in the rest of the world will give a damn what he says.

But as Ted Rall says, Republicans do not need Laffer anymore to provide them with some intellectual cover for their efforts to give more money to the rich. Now naked greed has taken over. 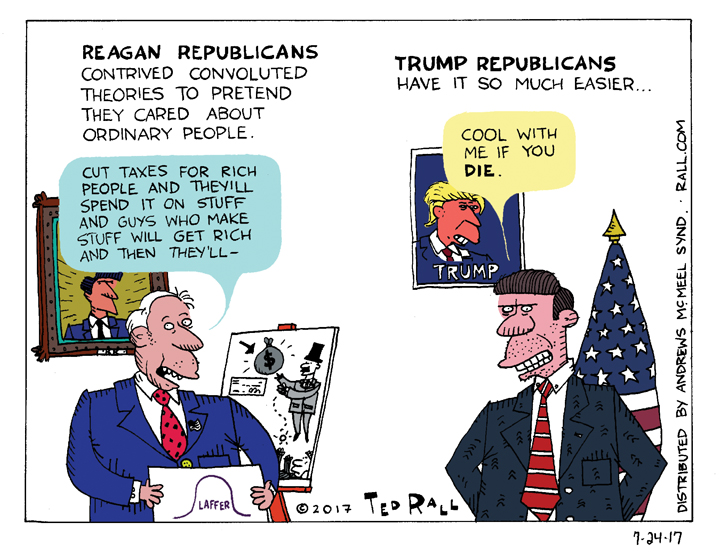 In the age of Reagan, Republicans had to pretend their policies were ultimately for the good of ordinary people. Now they don’t even bother to pretend.

Abusing the ‘qualified immunity’ provision to terrorize ordinary people » « What can you deduce about this driver?