It is a common tactic for people to invoke some high-falutin’ kind of ‘principle’ as a shield to deflect criticisms of their appalling views. The one that is most commonly invoked these days is to say that you are ‘fighting political correctness’ when you are denigrating minorities, gays, women and other marginalized groups whom you think are getting too uppity. The next step is to claim that your right to free speech is being denied when you get criticized for your words. These people seem to think that the right to free speech means that one has the right to not be criticized for exercising that right.

And now we have David French exploiting those same lines of argument. Those of you who follow politics closely may be familiar with his name. He is a somewhat obscure columnist for the conservative and neoconservative publication National Review who had a brief period in the limelight when his name was put forward during the Republican primaries by those who were apprehensive about Donald Trump as a good candidate to challenge him for the presidential nomination. But he decided not to run and sank out of sight.

But he resurfaced last week when he wrote a column about the release of Chelsea Manning release from prison. He was strongly critical of what Manning had done and the commutation of her sentence after having served seven years.

Our nation can’t be so obsessed with Trump that it misses one of the last poisonous acts of the Obama administration — yesterday’s formal release of Chelsea Manning (Bradley Manning legally changed his name to Chelsea in 2014). The man broke faith with his brothers-in-arms, broke faith with his country, and put lives at risk. Yet he has the gall today to go on a Twitter and Instagram spree (complete with posed pictures) celebrating his unearned liberty. Oh, and he’s still being applauded by the likes of Amnesty International and others as some sort of heroic “whistleblower.” 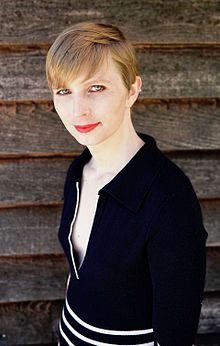 Manning after her release

Although I strongly disagree with French’s judgment about what Manning did, I am not going to take issue with his criticisms of Manning’s actions. What you will notice is that French uses male pronouns to describe Manning and he does so throughout the column, so it was not an accidental oversight that could happen to anyone who first got to know Manning when she presented herself as a man and accidentally slips into using the wrong pronoun. This was deliberate and it not go unnoticed and he was strongly criticized for ignoring the fact that Manning presents herself as a woman.

So French wrote a follow-up column defending himself and (surprise!) he says that those who criticize him and others who refuse to use the gender pronoun appropriate to a person’s choice of gender presentation are denying them their free speech rights. He uses the example of Title IX guidelines that have been drafted for teachers in public schools.

Under Title IX, a school must treat students consistent with their gender identity even if their education records or identification documents indicate a different sex. The Departments have resolved Title IX investigations with agreements committing that school staff and contractors will use pronouns and names consistent with a transgender student’s gender identity.

This is, to put it bluntly, compelled speech. It’s a violation of the rights of conscience of the speaker. It’s an effort by the government to coerce verbal agreement with a contested and contentious personal, religious, cultural, and scientific debate.

As a lawyer he should know that state employees do not have unlimited free speech rights when they act in an official capacity because they are agents of the state. For example, a teacher can belong and advocate for any nutty religion they belong to outside of school but they cannot proselytize in school. A teacher is also not free to teach anything that goes counter or well outside the bounds of the school’s curriculum. This is not limiting free speech. Similarly, if the editors of National Review insist that he use female pronouns if he wants to be published by them (I know that it us an unlikely scenario for that reactionary publication but stick with me here), that would not be a violation of his right to free speech because they are not required to provide him a platform

But then he digs himself deeper into a hole to counter the argument that it is simply impolite to ignore the gender preference of someone.

But when your definition of manners requires that I verbally consent to a fundamentally false and important premise, then I dissent. You cannot use my manners to win your culture war. I will speak respectfully, I will never use a pronoun with the intent of causing harm, and if I encounter a person in obvious emotional distress I will choose my words very carefully. But I will not say what I do not believe.

This is disingenuous to put it mildly. Does this mean that it is only when speaking to someone in person that he will consider which pronoun to use? Is he a trained psychologist as well to know when someone is in “obvious emotional distress”? How does he know if his words are causing harm? What does it even mean to say “if I encounter a person in obvious emotional distress I will choose my words very carefully”, if you do not say what words you will choose in that situation? And why should that be the criterion anyway?

It is not at all clear what exactly is the principle that he is defending here. No one is forcing him to use female pronouns to describe Manning. He is free to write what he likes and has indeed done so and can continue to do so. But he should not be surprised to be criticized for his petty use of the right of free speech, and for him to claim that he is the victim here is astounding. But that is all too common. People who are members of the ruling class are shocked, shocked I tell you, when those they consider their inferiors have the temerity to challenge them.

There are certain principles that are worth going out on a limb for. But the right to use a pronoun in opposition to that person’s preference is a ridiculous one and it should be no surprise that it arises from French’s strict adherence to his own interpretation of biology mixed with religion.

When I use a male pronoun to describe Chelsea Manning, I’m not trolling. I’m not being a jerk. I’m not trying to make anyone angry. I’m simply telling the truth. I’m reflecting biological reality, and I’m referring to the created order as outlined in Genesis 1 — “So God created man in his own image, in the image of God he created him; male and female he created them.”

When you have to quote religious scriptures to support your case, you are conceding that you have pretty much lost the rational debate in the secular world.

I don’t know if French is “trolling” or “trying to make anyone angry” because that goes to the question of his intent and I can’t be bothered to seek that out. But there can be no doubt that he is being a jerk.

Trump, Saudi Arabia, and Iran » « The Illuminati are taking over! Or maybe not.