The picture on the bombing On October 3 of the Kunduz hospital run by Doctors Without Borders (MSF) is becoming clearer and it looks increasingly like the US committed a war crime and is now trying to cover it up. To recapitulate the events, a US AC-130 gunship repeatedly fired upon the main hospital building over a period of 75 minutes, killing 22 people (medical people and patients alike) with some people in the ICU burned in their beds. This was despite the fact that the hospital compound is spread over two football fields and is away from other sites, the MSF hospital is a well known landmark, they had informed the US-led coalition of their GPS coordinates, and that the bombing continued for at least 30 minutes after desperate hospital officials told the US that they were bombing the hospital.

The US military kept changing its story repeatedly immediately after the event as new facts emerged that contradicted the old story. This is usually a sign that they are covering up the truth and trying to produce a story that covers the facts while excusing themselves.

PZ Myers linked to photos of the damage caused by the bombing and they are grisly. David Lindorff writes that US claims that the bombing of the MSF hospital was a mistake are looking extremely weak.

Evidence continues to mount that the US committed a monstrous war crime in attacking and destroying a fully operational hospital in Kunduz, Afghanistan on the night of Oct. 3, killing at least 22 people including at least 12 members of the volunteer medical staff of Medicine Sans Frontieres (Doctors Without Borders), the French based international aid organization that operated the hospital.

This even as the US desperately tries to bury the issue of its perfidy by offering “condolence payments” to victims of the attack, though without accepting blame beyond saying it was a “tragic mistake.”

The “mistake” claim looks increasingly shameless as it becomes clear that this was not, as the US corporate media continue to incorrectly report, a “bombing” gone wrong, but rather was a prolonged hour-long attack by an AC-130 gunship, the deadliest killing machine in the US Air Force’s weapons roster of mayhem. The aircraft, equipped with the latest night-vision sighting equipment, reportedly made five 15-minute assaults on the hospital’s main building housing the emergency operating room and recovery rooms, firing its array of howitzer cannons, 30-millimeter machine canons and other heavy weapons whose standard ammunition includes both high-explosive tips and anti-personnel rounds designed to scatter death in a wide pattern.

This is, in other words, not a precision targeting weapon, but a weapons system designed to spread death over a wide swath.

It explains why the building itself was not leveled, as happens when, for example, a drone first Hellfire missiles at a building or a plane drops a bomb. Rather, the hospital was deliberately set ablaze by incendiary weapons, and the people inside not incinerated were killed by a spray of bullets and anti-personnel flechettes.

Horrific enough to attack a hospital, but to attack it with a weapons system designed to slaughter as many people as possible is almost beyond comprehension.
…

As I wrote earlier, the US response to calls for an independent investigation stand in stark contrast to US complaints about Russia’s refusal to participate or cooperate with a so-called international investigation into the downing of Malaysian Flight MH-17 over Ukraine two years ago.

CNN reports that according to some US officials, the hospital did everything right to make the US aware who they were, further eroding the idea that the bombing was a mistake.

The initial findings of an investigation into a U.S. airstrike against a hospital in Kunduz, Afghanistan have concluded that the U.S. government was aware the site was a hospital, two U.S. officials told CNN Friday. But that information did not get passed to the correct military personnel, they said.

The officials declined to be identified because the investigation remains ongoing, and both emphasized the initial information could still change as the investigation proceeds. But Doctors Without Borders (MSF), who ran the hospital, “did everything right in informing us,” one of the officials said. The location of the hospital “was in the military database” of restricted sites such as hospitals, mosques and schools that U.S. pilots are not allowed to strike even if insurgents are present.

So if, as seems to be the case, it was highly unlikely that the hospital bombing was a mistake, that would mean that the hospital was deliberately targeted for destruction. But why would the US do such a terrible thing, something that is indubitably a war crime? What possible motive could they have had?

Ken Dilanian of the Associated Press reports on a possible motive, that the hospital and its medical staff and patients were sacrificed in pursuit of a single-minded goal of killing a Pakistani Taliban operative that the US believed was in the hospital even though no evidence has emerged that this was the case.

American special operations analysts were gathering intelligence on an Afghan hospital days before it was destroyed by a U.S. military attack because they believed it was being used by a Pakistani operative to coordinate Taliban activity, The Associated Press has learned.

It’s unclear whether commanders who unleashed the AC-130 gunship on the hospital — killing at least 22 patients and hospital staff — were aware that the site was a hospital or knew about the allegations of possible enemy activity. The Pentagon initially said the attack was to protect U.S. troops engaged in a firefight and has since said it was a mistake.

The special operations analysts had assembled a dossier that included maps with the hospital circled, along with indications that intelligence agencies were tracking the location of the Pakistani operative and activity reports based on overhead surveillance, according to a former intelligence official who is familiar with some of the documents describing the site. The intelligence suggested the hospital was being used as a Taliban command and control center and may have housed heavy weapons.

After the attack — which came amidst a battle to retake the northern Afghan city of Kunduz from the Taliban — some U.S. analysts assessed that the strike had been justified, the former officer says. They concluded that the Pakistani, believed to have been working for his country’s Inter-Service Intelligence directorate, had been killed.

No evidence has surfaced publicly suggesting a Pakistani died in the attack, and Doctors without Borders, the international organization that ran the hospital, says none of its staff was Pakistani. The former intelligence official was not authorized to comment publicly and spoke only on condition of anonymity.

This would by no means be the first time that the US has cavalierly killed innocent people in its pursuit of its perceived enemies. The recent release of documents by a whistleblower about the US drone killing program reveals that the US government routinely does so and then classifies the dead as enemy combatants.

It is becoming increasingly clear that the US knew it was a hospital and bombed it anyway.

Whether or not the U.S. airstrike that killed 22 people at a hospital run by Doctors Without Borders (MSF) near Kunduz, Afghanistan, on Oct. 3 was a violation of international humanitarian law depends in large part on whether the military knew the site was a hospital, and if not, whether military officials took adequate steps to figure out what they were bombing. The latest reporting on the incident is not encouraging.

On NBC Nightly News on Thursday, Pentagon correspondent Jim Miklaszewski reported that, based on the accounts of Defense Department sources, cockpit recordings from the AC-130 gunship involved in the incident “reveal that the crew actually questioned whether the airstrike was legal.” He also quoted a U.S. defense official suggesting that the attack “may in fact amount to a war crime.” The video and audio cockpit recordings of the incident, which feature conversations between the plane’s crew and U.S. troops on the ground, are at the center of the military’s investigation into the incident, as the Daily Beast’s Nancy Youssef reported last week.* The recordings have not been released publicly or even to the members of Congress who received a classified briefing on the incident.

To compound the crime, a US armored vehicle forcibly entered the hospital compound over the protests of the hospital staff and may have destroyed some of the evidence that would be needed for an inquiry, lending further support to the idea that a cover up is in progress.

An American armored vehicle on Thursday barged unannounced into the wreckage of the Doctors Without Borders hospital in Afghanistan that the U.S. bombed earlier this month, reigniting tensions between Washington and the aid organization over the Oct. 3 attack.

The intrusion may have damaged evidence at the site that could help explain the bombing, the organization says.

“Their unannounced and forced entry damaged property, destroyed potential evidence and caused stress and fear for the team,” said Tim Shenk, a press officer for Doctors Without Borders. The organization lost 12 staff members and 10 patients in the bombing.

MSF has rejected US claims that the bombing was a mistake. The US is stonewalling demands by MSF for an independent inquiry even though the International Humanitarian Fact Finding Committee (IHFFC) has announced it is willing to conduct one.

The fact that the US is still refusing to agree to an independent inquiry suggests that they realize that this is a war crime and are trying to cover it up by stalling for time. 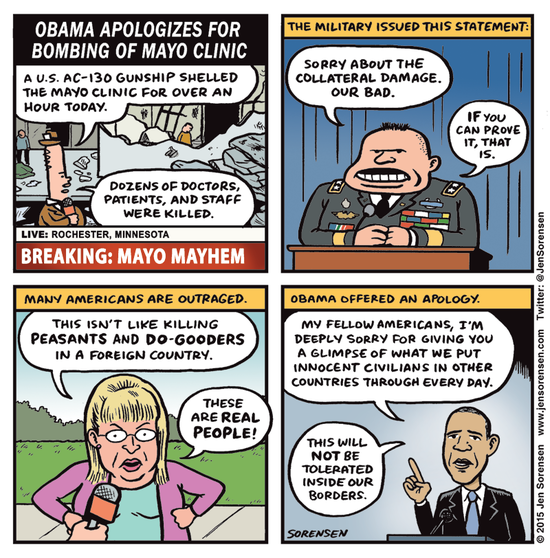