The more one digs into the senate torture report, the more depressing it gets. In addition to the details of what was done which are bad enough, comes the news that the US government paid the enormous sum of $81 million to two psychologists to come up with the methods, even though they had no “specialized knowledge of al Qaeda, a background in counterterrorism or any relevant cultural or linguistic experience.” They apparently just copied what other countries had used, not to get information but to obtain false confessions for propaganda purposes. So right from the start, the idea that these torture methods were useful was not even credible and the members of the psychology and medical professions were complicit in these acts. You can read about these sadists here.

The report has brought out its usual defenders of torture. George W. Bush called the people who carried out these awful practices ‘patriots’, something that president Obama has also done. To call people patriots who committed such disgusting and depraved acts (and we likely haven’t heard the worst of it) is an act of incredible immorality. Imagine if the leaders of North Korea or Iran or Russia defended the use of torture in their countries and said that the people who committed them were patriots who were defending the nation. Would we accept that?

Meanwhile one of the biggest torture advocates Dick Cheney, while condemning the report and justifying the torture, seems anxious to make sure that the buck does not stop with him and says that his boss George W. Bush knew and approved of all these things all along. And notorious liar and former CIA director Michael Hayden, to no one’s surprise, denies lying.

But what is perhaps most damning is how much public support there is in the US for torture. 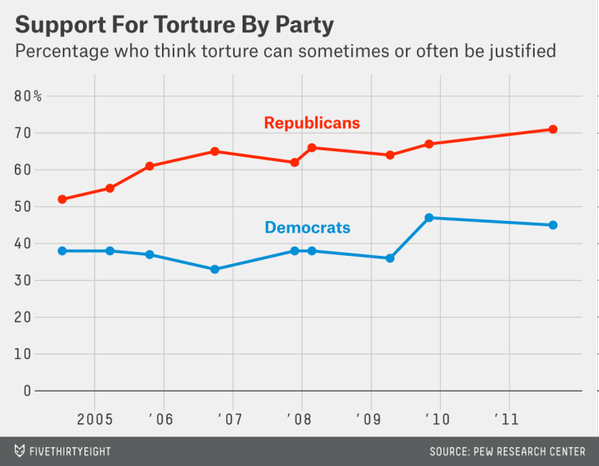 What people seem most upset about is not so much the torture itself but that at least some of th details (and you can be sure the full story is much worse) has been released. 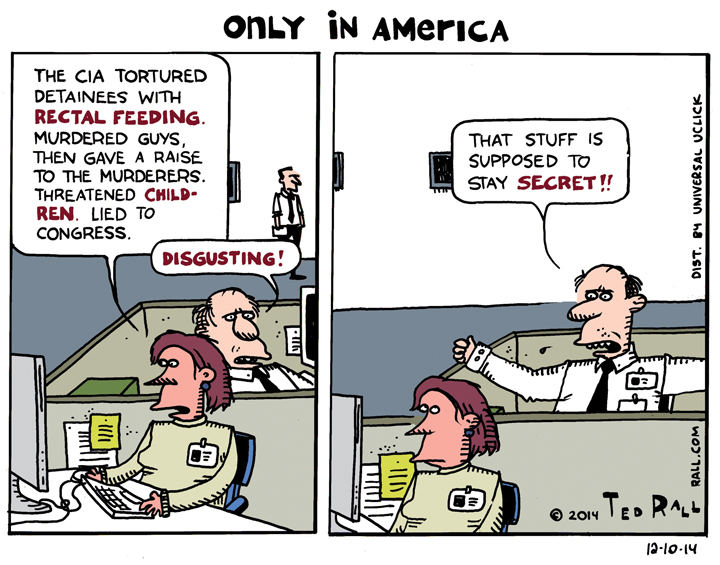 That is why it was astounding to hear senator Ron Wyden being interviewed on NPR three days ago. Wyden is one of the better members of Congress and has been one of the people trying to push back against the abuses of the intelligence agencies in both the NSA spying scandal and on torture. And yet, when asked directly and repeatedly as to whether the people who carried out these torture abuses should be prosecuted, he ducked the question saying that the report enabled the American people to have a debate, saying “The conduct described in this report is not America. And I will tell your listeners I hope that what this report does is it finally closes the door on the possibility of the United States ever resorting to torture again.” President Obama also said that torture is “contrary to who we are.”

Sorry senator Wyden and president Obama, you cannot have it both ways. Unless the people who committed and authorized these atrocities are prosecuted and punished, then we have to conclude that this is America. You cannot claim absolution without accountability. If you have the power to punish those who committed these horrendous crimes but do not do so, then you become an accomplice to them. What basis is there to hope that this kind of thing will never happen again if the people who did this are never punished? It would be like not punishing murderers and hoping that saying that murder is awful will be sufficient to prevent future murders.

Peter Beinart sums it up.

Torture, declared President Obama this week, in response to the newly released Senate report on CIA interrogation, is “contrary to who we are.” Maine Senator Angus King added that, “This is not America. This is not who we are.” According to Kentucky Congressman John Yarmuth, “We are better than this.”

No, actually, we’re not. There’s something bizarre about responding to a 600-page document detailing systematic U.S. government torture by declaring that the real America—the one with good values—does not torture. It’s exoneration masquerading as outrage. Imagine someone beating you up and then, when confronted with the evidence, declaring that “I’m not really like that” or “that wasn’t the real me.” Your response is likely to be some variant of: “It sure as hell seemed like you when your fist was slamming into my nose.” A country, like a person, is what it does.

America is now a state that practices torture and will have to live with that label unless it shows that those who commit it will be punished severely and not lauded as heroes and patriots. As Justin Raimondo states, we are now the United State of Torture.

This is who we are. We may not like the ugly reflection we see in the mirror but deluding ourselves that we are still beautiful will not change the reality.