Debt cutting frenzy has been rampant across North America and Europe, with ‘everyone’ (i.e., politicians, elite media, and the oligarchs) arguing that if the deficits are not reduced by cutting spending on social services, countries risk ruin. This phony consensus has been driven by pseudo-grassroots campaigns like ‘Fix the Debt’ and the Simpson-Bowles ‘Catfood Commission’, while standing in the shadows and pushing this agenda is billionaire Pete Peterson who has poured half a billion dollars into trying to cut Social Security, Medicare, Medicaid, and other social programs. 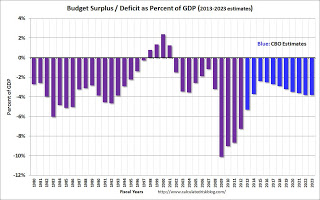 This sense of debt panic has continued despite the fact that the Congressional Budget Office studies suggests that the deficit as a percentage of GDP has been steadily declining in the last few years. After a high of around 10% in 2010, it dropped to 5% in 2012 and is expected to drop to just 3.7% in 2014 and 2.4% in 2015 before slowly rising again.

Where did this deficit cutting mania come from? It became the conventional wisdom apparently out of the blue but it appears that its main impetus was in a 2010 paper by two Harvard economists Carmen Reinhart and Kenneth Rogoff, who published a study that claimed to show, based on their long-term analysis of the data on many countries, that when the size of a country’s debt reached a threshold of 90% of the GDP, its growth rate dramatically declined and went into negative territory. This kind of thinking led many countries, like the UK, to drastically cut spending, causing much suffering.

The radio program Marketplace describes how influential this paper, and its authors, was in setting the budget agenda in much of the developed world.

The pair met with 40 senators in 2011 and “they told them, you need to act now and that we can’t afford to spend more money to stimulate the economy.” Also reading research by the two Harvard economists were budget chairs from both parties, then Treasury Secretary Timothy Geithner, the Simpson-Bowles Commission and financial leaders in countries overseas. “When we were talking about the budget deficit and the debt in 2010, 2011 and 2012, everybody had this 90 percent threshold on their minds,” says [Quartz business reporter Tim] Fernholz.
…
“When politicians around the country and in fact around the world were deciding what to do to save the economy after the recession, they were reading this paper and it was scaring them,” says Fernholz. “And it was making them think, we need to cut the debt now if we want to save the economy.”

There has been quite a bit of chatter in the last two days in the world of academic economics about the discovery of serious errors in this paper. As Mike Konczal says, right from the beginning there were those who criticized the study and said that they could not replicate the author’ results (always a warning sign), even though the raw data was publicly available. The problem was compounded by the fact that the authors for a long time did not release to other researchers the spreadsheet that had their data analysis. Furthermore, the causality relationship was not clear, even if one accepted their results. Does high debt cause slower growth or does slower growth cause high debt?

Now Thomas Herndon, Michael Ash, and Robert Pollin at the University of Massachusetts, after also being unable to reproduce the results, did manage to gain access to the spreadsheet analysis and have published a paper that challenges the Reinhart-Rogofff conclusions and says that they arose from serious errors.

Herndon, Ash and Pollin replicate Reinhart and Rogoff and find that coding errors, selective exclusion of available data, and unconventional weighting of summary statistics lead to serious errors that inaccurately represent the relationship between public debt and GDP growth among 20 advanced economies in the post-war period. They find that when properly calculated, the average real GDP growth rate for countries carrying a public-debt-to-GDP ratio of over 90 percent is actually 2.2 percent, not -0.1 percent as published in Reinhart and Rogoff. That is, contrary to RR, average GDP growth at public debt/GDP ratios over 90 percent is not dramatically different than when debt/GDP ratios are lower.

The authors also show how the relationship between public debt and GDP growth varies significantly by time period and country. Overall, the evidence we review contradicts Reinhart and Rogoff_’s claim to have identified an important stylized fact, that public debt loads greater than 90 percent of GDP consistently reduce GDP growth.

I can understand the spreadsheet formula coding error. We all make mistakes and while this one is particularly embarrassing and suggests sloppiness, it does happen from time to time. Much more troubling is the way some data were omitted (those of countries where the data went against their hypothesis) and some of the techniques that were used in analyzing the data. All three errors pushed their results in the same direction, of making their conclusions more dramatic and raising alarms about the 90% debt cliff.

Take just one of the analysis problems, the way they averaged the statistics over countries. Although economics is not my field, the practice of taking averages of averages is always something to be done warily and avoided if at all possible, because each average may be weighted differently. In fact, in my introductory physics courses, I often give students a little problem. If a car travels the first 300 miles of a journey at an average of 50 miles per hour and the second 300 miles at an average of 75 miles per hour, what is the average speed for the full 600 miles? The answer is not 62.5 mph, the average of the two average speeds as some students mistakenly assume. It is in fact the total distance (600 miles) divided by the total time (10 hours), giving 60 mph. But while my introductory physics students can be excused for their naivete in jumping to such a conclusion, it is shocking to find seasoned researchers doing this.

The reactions to these new revelations have been widespread and harsh in their condemnation of Reinhart and Rogoff. Paul Krugman says that he never believed the Reinhart-Rogoff results in the first place but that he is disturbed by their response to the recent criticisms, where they seem to be deflecting attention to irrelevancies.

As Dean Baker of the Center for Economic and Policy Research says, “If facts mattered in economic policy debates, this should be the cause for a major reassessment of the deficit reduction policies being pursued in the United States and elsewhere. It should also cause reporters to be a bit slower to accept such sweeping claims at face value.”

But of course, facts don’t matter to our elite world of pundits and media, if those facts stand in the way of their greed and ideology. So I don’t expect the complete undermining of the evidentiary basis for the current austerity policies to have any effect on the way that the media reports on this issue.

As cartoonist Tom Tomorrow says, Obama will continue to seek a grand bargain to cut the deficit by gutting Social Security and Medicare.

Because ‘we all know’ that the current deficits are dangerous, no?