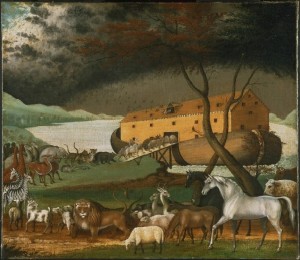 Ken Ham is trying to raise 24 million dollars to build a life size replica of Noah’s Ark for the Ark Encounter theme park and zoo. Ham hopes that the park will convince people that Noah really could have fit two of each of the worlds animals on a 450 foot wooden boat. While apologists like the Creation Research Institute’s John Woodmorappe argue it could have been feasible for Noah to build an ark, investors are not as confident in Ham’s Ark project. Which is why the young earth creationist organization Answers in Genesis has been actively seeking public funding for the project,in the form of tax subsidies and public works projects for the park. But should tax payer dollars really be used to push a religious fantasy? For this episode we will plunge into the tale of Noah’s Ark and note the absurd consequences of reading this myth literally. Also for this episode we begin a multi-part “God Thinks Like You” mini-series examining the hidden influences behind how religious believers and skeptics make moral choices.

Should Quebec ban the scarf?

How the animals fit in the Ark.