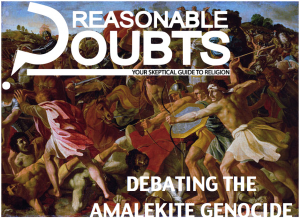 When Richard Dawkins wrote “The God of the Old Testament is arguably the most unpleasant character in all fiction.”, he was spot on. Many Jews and Christians recognize the deep problems these texts present to their views on the most basic moral questions. Unfortunately, it’s become commonplace for some christian apologists to claim they ‘wrestle’ with these difficult passages when, in reality, they are rewriting them. Recently, Justin Schieber was invited to debate God’s command to slaughter the Amalekites on the popular christian radio show, ‘Unbelievable’ against apologist John Allister. In this episode, we give you the debate, response emails and closing commentary.