The Eye of Argon is a legendary work of bad fiction (you don’t have to trust me, just read a page or two), but we have to be fair: its author did not try to publish it, didn’t try to tell the world that it was the greatest work of fantasy ever, and didn’t brag about his book and movie deals.

That modesty is not a property of Gloria Tesch, author of the Maradonia Saga, a series I was introduced to just this past weekend. It may not be as badly written as Eye of Argon (although it comes close), but the ego of the author is astonishing.

END_OF_DOCUMENT_TOKEN_TO_BE_REPLACED

Somebody calling themselves “True Free Thinker” is irate that anyone would teach kids about evolution. As you might guess from the moniker, this person is actually anti-atheist and anti-science; what you might not immediately realize is that he’s a terrible thinker, terrible writer, and even worse video editor. He’s assembled a very strange video which is like a slow, bad ad for the book, Grandmother Fish.

END_OF_DOCUMENT_TOKEN_TO_BE_REPLACED

I made a dreadful mistake. Before embarking on my trip to Germany, with those long transatlantic flights, I stocked up my Kindle with a couple of books to keep me entertained. One of them was Nessa Carey’s Junk DNA: A Journey Through the Dark Matter of the Genome

. It was a poor investment. I could not finish it. I got maybe a half hour worth of reading out of it before I was too exasperated to continue, and instead watched a ghastly Night at the Museum sequel being shown on the plane’s entertainment system. It was a terrible movie, but better than this book.

Actually, it didn’t take me a half hour to become peevish. The very first page after the acknowledgments, in a section called “Notes on Nomenclature,” contained this abomination.

END_OF_DOCUMENT_TOKEN_TO_BE_REPLACED

When I was growing up, I read a lot of trash: comic books and Edgar Rice Burroughs, for instance. I read them because I liked them, not because I had a list of Great Books I should be reading, and because of that, I grew up loving to read.

END_OF_DOCUMENT_TOKEN_TO_BE_REPLACED

I’ve read 83 of NPR's Top 100 Science-Fiction & Fantasy Books — and that’s about enough. Of the ones I have read there were about a dozen I wish I hadn’t, and of the ones I haven’t read, there were none I’m interested in reading.

I know what I’ll be reading in July: Go Set a Watchman, the old new novel from Harper Lee.

"Scout (Jean Louise Finch) has returned to Maycomb from New York to visit her father, Atticus," the publisher’s announcement reads. "She is forced to grapple with issues both personal and political as she tries to understand her father’s attitude toward society, and her own feelings about the place where she was born and spent her childhood."

END_OF_DOCUMENT_TOKEN_TO_BE_REPLACED

If Wade could point to genes that give races distinctive social behaviors, we might overlook such shortcomings. But he cannot.

He tries. He tells, for instance, of specific gene variants that reputedly create less trust and more violence in ­African-Americans and, he says, explain their resistance to modern economic institutions and practices. Alas, the scientific literature he draws on is so uneven and disputed that many geneticists dismiss it outright. Wade also cites a 2008 paper that analyzed the genomes of almost 1,000 people from 51 populations around the globe. That paper found that people from different regions do indeed tend to have distinctive genomes. But Wade errs in saying the paper supports his idea that genetic selection has created races with particular social inclinations.

To begin with, the 2008 study mentions nothing about race. It merely establishes that many of the slight differences between human genomes cluster by geography at many scales, including continents, and that genomes from any given location will most likely be similar, just as two people from a particular place will most likely speak with similar accents.

Second, and far more serious, the paper’s authors specifically state that while selection may sometimes create genetic differences between populations, they saw little evidence that selection shaped the small genetic differences they found. In fact, they say the differences can be largely explained by “random drift” — arbitrary changes in genes having little to no effect on people’s biology or behavior. All of this directly contradicts Wade’s argument. Yet he baldly claims the study as support.

And he does this sort of thing repeatedly: He constantly gathers up long shots, speculations and spurious claims, then declares they add up to substantiate his case.

You know, mangling peer-reviewed articles and throwing a prejudicial slant on science that ignores the totality of the evidence is what creationists do, but I’m sure Wade’s HBD supporters will be along shortly to accuse Dobbs of being a ‘new creationist’.

Check out Dobbs’ blog post on the article. Very first comments are tiresome cliches from the same usual bores who show up to defend racism, flinging around accusations of “New Creationism” and “Cultural Marxism”. Prediction fulfilled.

I had three children. I read Goodnight Moon to all three of them, many times each. If only I’d had a copy of Goodnight Dune!

Play the game: Can you identify the book from its map?. I got 9 right out of 10 (I didn’t have the slightest clue on #5, and just guessed).

These are the kinds of reviews of The Happy Atheist I like best. 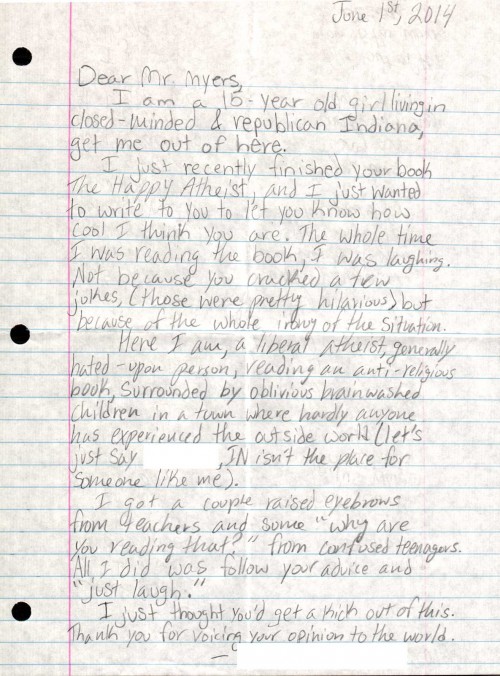