I’ve just discovered the literary works of Mildred Houghton Comfort, a woman who wrote a number of biographies of Important Men of American Capitalism, back in the good old days of the 1950s. William L. Knight, Industrialist. Walt Disney, Master of Fantasy. John Foster Dulles, Peacemaker. Little Punk, the Baby Elephant. She was a prolific supporter of the conservative status quo.

These aren’t exactly popular books any more, but you can still find a few old used copies for sale. She also wrote J. Edgar Hoover, Modern Knight Errant, and there are a few pages from that scanned and available on the interwebs. It’s horrifying. 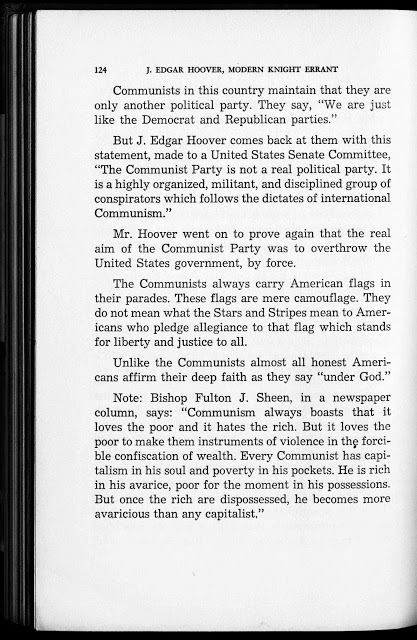 Disclaimer: I was born in the 1950s, but I was tiny and innocent and unaware and had no idea what was going on. I became conscious in the late 1960s, a much more copacetic decade. This kind of crap was more the product of The Greatest Generation, which I’ve heard was perfect and admirable in all ways, unlike all other generations of Americans.

I haven’t been able to find out much about Ms Houghton Comfort, other than when she lived: 1886-. That emptiness after the en dash is rather disquieting, and lacking in closure.

I understand some people on the internet enjoy videos of cats » « A word of warning about Hits & Mrs.