Admire this work of art. 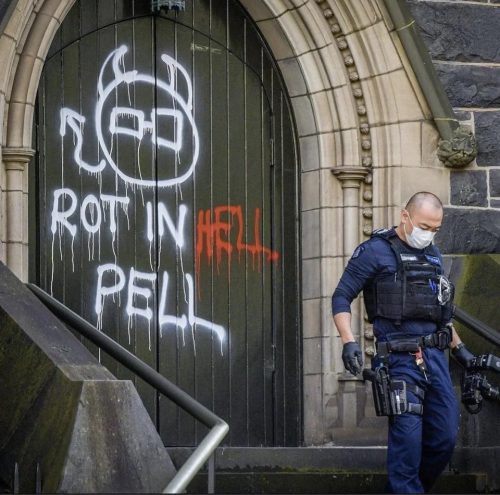 As you’ve probably heard, Cardinal Pell is dead and will be buried in the Vatican tomorrow. The news has been strange — I’m not seeing much talk about his child sex abuse history, since he was acquitted, after all. All was forgiven, the Catholic church was relieved to be let off the hook.

On the day of Pell’s acquittal in 2020, Francis offered his morning Mass for all those who suffer from unjust sentences, which he compared to the persecution of Jesus.

Ironic, then, that the latest scandal is the discovery of a memo written by Pell.

Australian Cardinal George Pell was lying in state on Friday, with funeral preparations overshadowed by revelations that he was the author of an anonymous memo that branded Pope Francis’ pontificate a catastrophe.

You don’t expect loyalty from a junkyard dog, do you? He was just a mean-spirited, nasty little man. He was the kind of rabid conservative who hated science and did immense harm to society.

The late Cardinal George Pell left a legacy of climate science denial which – in his later years – became ever more distanced from reality and the position of the Catholic church.

For decades in newspaper columns and speeches, Pell popularised climate denial talking points to dismiss the science of global heating and to brand environmentalists as hysterical and in the grip of a pseudo-religion.

What’s impressive is that Pell was one of the few people who could make a positive contribution to humanity by simply dropping dead.