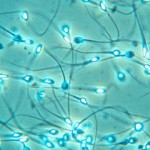 I’ve told the story of Leeuwenhoek’s prudishiness to my students in the past — it’s amusing that the father of microbiology, who had horrified the public with the discovery of ‘animalcules’ living in drinking water, was himself disgusted by what came out of his own body, and was horrified that semen contained squiggly squirmy little creatures. He even wrote to the Royal Society to say he wouldn’t mind if his discovery was suppressed.

“If your Lordship should consider that these observations may disgust or scandalise the learned, I earnestly beg your Lordship to regard them as private and to publish or destroy them as your Lordship sees fit.”

Then there was the bit where he was practically falling all over himself to assure everyone that his sample came from proper conjugal relations, not from the sin of onanism or by any other less than blessed mechanism. It was weird, man.

“Without being snotty, Leeuwenhoek (the ‘van’ is an affectation he adopted later on) was not trained as an experimental thinker,” explained Matthew Cobb, a British zoologist and author of the book “Generation: The Seventeeth Century Scientists Who Unraveled the Secrets of Sex, Life and Growth.” Cobb recalled by email that when Royal Society Secretary Henry Oldenburg asked Leeuwenhoek to look at semen, the Dutch draper initially did not reply “because he felt it was ‘unseemly.'” Even though he eventually overcame his reservations, Leeuwenhoek added so many caveats to his semen research that it is clear he remained somewhat uncomfortable.

“He reassured the Royal Society that he had not obtained the sample by any ‘sinful contrivance’ but by ‘the excess which Nature provided me in my conjugal relations,'” Cobb explained. “He wrote that a mere ‘six heartbeats’ after ejaculation, he found ‘a vast number of living animalcules.” A few months later, he wrote the aforementioned letter saying that he would not at all mind if his discovery was suppressed. After all, in addition to being grossed out, Leeuwenhoek was not under the impression that he had found anything special.

Unfortunately, after laughing at such Puritanism in lecture, I once went to lab and discovered that a student had made a quick trip to the lavatory and made his own slide, which he proudly showed off in class. I had to be the modern prude and explain that we discouraged the collection of human fluids in lab because they are a source of infection and contamination, and handed him a bottle of 70% alcohol and told him to sterilize all the gear he was using and dispose of his sample in the biological waste container.

How do you tell someone their dad was a world-class jerk? » « Sarah Huckabee Sanders is the governor of Arkansas now