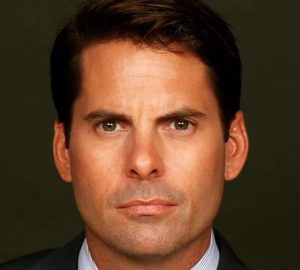 This is Rob Finnerty, a newsreader for Newsmax. Nice hair, strong chin, looks like a real Chad.

Also, he’s real mad about something, like a real Chad. He’s mad about the availability of dolls, which is a little off-brand for a Chad…unless he can make it about black people.

“My daughter is just a cute little 6-year-old white girl — we couldn’t find anybody that looked like my daughter,” Finnerty said in the video. “It was—the whole place, it was, like wokeified. How long has this been going on with American Girls? It was somewhat of a bizarre experience.”

“Wokeified”? This word is getting overused by the Right.

Also, he lied. Check out the American Girl store online — there’s a wide range of skin tones available. A TikToker visited the same store shortly after his rant, and found it well-stocked.

Almost immediately, Fidel noticed that the store was brimming with white dolls — not only on display but in boxes stacked high on shelves and in animated videos on the wall.

“The literal first doll that you see when you walk into the store,” Fidel says, zooming in on a smiling white doll with blond pigtails.

Fidel continues to walk around the store, recording the multitude of white dolls on shelves and in boxes. He remarks that, while the store has “thrown in some other races,” a “great portion” of the dolls on display are white.

The Root checked out the story as well.

The Root’s office is located just a few steps from the American Girl store. Our writers and editors pass by it everyday and we can clearly say the store is mostly filled with white dolls.

“Did he stop to think that perhaps all of the white dolls were sold out at the store? Was going on the American Girl website not an option for him? Surely if he did, his panic would’ve subsided,” she wrote. “In the All Dolls section, you must scroll through almost 20 white dolls before you get to a doll of color.

“I also imagine he forgot about the decades that cute, little Black and brown girls could only choose from all-white doll shelves — none of which looked anything like them. Why? Because whiteness was the default.”

You must forgive Chad…I mean, Rob. He’s not a journalist. He doesn’t actually investigate anything. He reads a teleprompter, and looks for things that will inflame his audience of old racists. He didn’t get the job because he’s perceptive, or intelligent, or well-educated, he’s there to look smart on TV. He is what he is, which is the very lowest rung on the information ladder. He’s also not a trustworthy rung, so ignore him.

The 6 Jan Committee has reached the conclusion that… » « Was there ever a good internet?