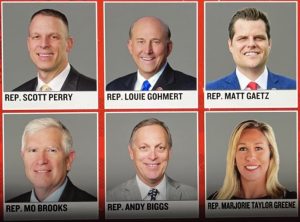 “The only reason I know to ask for a pardon, because you think you’ve committed a crime.”

After gripping testimony from former Justice Department officials describing Donald Trump’s efforts to undo the 2020 election results, House lawmakers on Thursday identified five Republican lawmakers who allegedly sought pardons — suggesting not just their own fear of criminal exposure, but a belief that the outgoing president would preemptively protect them from the investigations that followed the Jan. 6, 2021, attack on Congress.

Videotaped testimony presented at the end of Thursday’s hearing named Reps. Matt Gaetz (Fla.), Mo Brooks (Ala.), Andy Biggs (Ariz.), Louie Gohmert (Tex.) and Scott Perry (Pa.) as the lawmakers who sought preemptive pardons after or, in at least one case, before the Capitol breach. They were among the most active and outspoken supporters in Congress of Trump’s false claims of election fraud.

They’ve confessed to treason. Strip them of any powers they might have, impeach them, and if found guilty, begin the criminal proceedings. Those five, at the very least, need to have the full weight of the law, the law that they sought to avoid, brought down hard on them.

Marjorie Taylor Green also belongs in that rogue’s gallery. They’re all desperately trying to deny that they wanted a pardon, but that’s what criminals say — they were all quite vocal about supporting Trump’s insurrection.

Treacherous scum, every one of them.

Friday Cephalopod: TGIF! Dance! » « Is this my shocked face, or my unsurprised by Jordan Peterson face?