Here’s one for the Evolutionary Psychology Hall of Shame:

The author of this “study” has a theory, which is his, that breasts are an expensive ornament that could only be selected for in a stable environment where individuals can afford them. They’re kind of like elaborate antlers in species that have them, I guess. Maybe. I could consider an argument along those lines, except this one runs off the rails pretty quickly.

My theory of the evolution of breasts is that they are an adaptation for a slow life history rather than a fast life history. Breasts are K-selected. r-selected animals with a fast life history have short lifespans and mature quickly. K-selected species have longer lifespans, invest more in their children and take longer to mature. Fast life history is an adaptation to unstable ecologies where mortality is more random and uncontrollable so the best option is to have as many offspring as possible. By contrast in predictable environments, there’s an advantage to investing more in offspring to increase their chances.

Breasts by selecting for stable, long-term relationships between males and females facilitate long-term investment in offspring. It makes sense that only humans would have permanent breasts. Compared to other primates we have a slow life history strategy. We live for a particularly long time, take a long time to mature and need substantial resources and protection to develop our large brains.

For those of you fortunate enough to have never encountered racist literature, this r and K stuff, while legitimate parameters in ecology and evolutionary biology, is going to be sadly abused by racists. They want to argue that different populations of humans are living in very different r and K selection regimes, and that they have been living in those situations for long periods of time that are evolutionarily significant. They only trot out these terms to justify with pseudoscience their biases. So be warned: this is garbage science of the rankest kind.

You can’t see the axes of the big graph in the tweet above, so let me extract it for you. 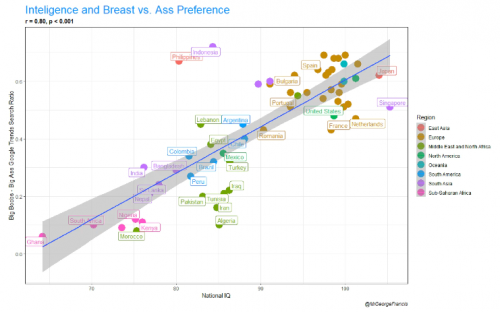 The title, Intelligence and Breast vs. Ass Preference, should alert you to the absurdity that is about to follow. Note the horizontal axis: National IQ. This is a totally bogus parameter. As near as I can tell, it comes from the work of Richard Lynn, an English psychologist associated with a network of scientific racists who fabricated a list of IQ values associated with different nationalities which supported his bias that Africans were less intelligent than Europeans who were less intelligent than Asians. He’s on the board of the Pioneer Fund, an organization that hands out cash to other racist groups and individuals, and he’s also on the board of the notoriously racist journal Mankind Quarterly, which is a recipient of those funds. It’s an incestuous gang of bad pseudoscientists who reference and support each other’s bad pseudoscientific claims.

Yes, it’s exactly what it sounds like. He used Google Trends to look at the frequency of people in various countries searching for the terms “Big Boobs” vs “Big Ass”. In English. He even admits that his results may reflect a linguistic bias, unaware that there are a lot of other reasons why this could be a very poor metric for measuring anatomical preferences. He’s an idiot trying to shoehorn technical terms from evolutionary biology into an inappropriate context with an incredibly sloppy methodology, all to support his racist biases.

Also note that Emil O W Kirkegaard, another racist, is touting this “work”, suggesting that it should appear in the next issue of Mankind Quarterly, which does tell you something about MQ’s standards.

Intelligence and the Evolution of Breasts

He did later sort of retract that, dismissing criticisms of the inanity of that graph by saying this was a blogpost, not a formal study and making it clear that it wasn’t his work, but George Francis’s.

I want you to know that it was painful for me to dig into Kirkegaard’s repulsively racist Twitter history, in part because he has me blocked (Yay! And also easily circumvented), but also because it was imbedded in all kinds of wretched crap. Did you know Gypsies got bigger balls than Hungarians? And that Unnatural hair color really is a danger zone marker? (You will not be surprised to learn that a picture of Rebecca Watson is used as evidence, although I’m sure she’s tired of it.)

I need a shower after that.

Kirkegaard, by the way, is an editor for Mankind Quarterly. You should be troubled by the fact that Psychology Today, a reasonably mainstream publication that I already didn’t trust at all, has cited him in a terrible article that claims “Higher rates of mental illness have been found on the far left.” The foundation of the entire claim is built on a single paper by Kirkegaard published in Mankind Quarterly, which, I remind you, he edits.

The real danger zone marker here is Mankind Quarterly. Any time you see that journal cited, know that you are going to be exposed to toxic racist bullshit of the worst kind, with the kind of rigor that can be demonstrated with a graph of Intelligence and Breast vs. Ass Preference.

We got legs! » « Before the Bat, there was the Spider