If I asked you to think of a masked comic book hero, the alter ego of a wealthy multimillionaire, who wore a costume chosen to strike fear into the hearts of criminals, and who had a battery of gadgets he used to foil crime, who would you think of? Batman? WRONG! It’s…the SPIDER, Master of Men! 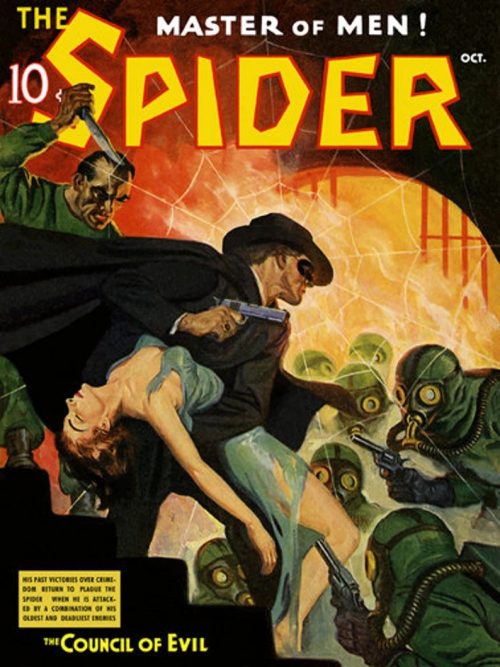 Yeah, I never heard of him either.

That’s rather interesting, actually, because he was a phenomenally popular character in pulp novels of the 1930s and later. He was in several movie serials, and published in multiple novels over the decades. Apparently he was revived for some comic book series in the 1990s and 2000s, too. Before there were superheroes with magic powers, there was a collection of mysterious detectives in the popular literature — the Shadow, the Green Hornet, Doc Savage, and of course, the Spider — who were all eventually eaten by the Bat who now dominates comic books and movies.

The only thing that seems to distinguish the Spider from the Batman is that the Spider relied on the two pistols he was always running around with, and which he used to straight-out murder his foes. I wonder if the Batman’s evolutionary success, since he was always portrayed as avoiding killing, was a product of Fredric Wertham and the Comics Code Authority, which made publishers leery of excessive violence? The gunslinger heroes seem to have faded away, to be replaced with overpowered superheroes who don’t carry guns, but can raze whole city blocks with a punch. Maybe the Spider needs a Zack Snyder movie? (No, he does not. No one deserves that.)

Here’s a video with some clips from the old Spider serials.

I’m a sucker for that old pulp fiction graphic style, but I have zero interest in watching any of the old serials or reading the pulp novels of the time, and I’m not going to mourn the absence of the Spider from modern movies. What I find interesting is that this one successful, popular franchise could so thoroughly disappear over time, and not even occupy any space in my memory. It gives me hope for the future, it does. I can look at the current glut of comic book movies and tell myself that this too shall pass.

Or that they’ll be replaced with a different glut of franchised fantasies.

The racist BS of Intelligence and Breast vs. Ass Preference » « A surprisingly accurate online IQ test