Now the Republicans want to ban math textbooks. Florida has rejected 54 out of 132 proposed math textbooks because Ron DeSantis says they contain Critical Race Theory. Really? I found an example of what they object to.

This is math homework from a public school district in Missouri. How does this help kids learn algebra, exactly? No wonder China is winning…

A few points I have to make:

1. That’s not CRT. Those are just story problems on a worksheet about Maya Angelou.

3. Isn’t it obvious how it will help kids learn algebra? They have to use algebra to crack the code and puzzle out the whole story.

4. I can tell the critic just zeroed in on the mention of sexual abuse and prostitution. Those things exist. They happen. They don’t disappear if you close your eyes real tight.

5. It’s also not from a Florida math textbook. It’s taken from an unapproved collection of potential math problems from an online site. For shame, Ms Pushaw! You lied!

Florida is working so hard to become the worst state in the union. They’ll have to work harder, though, because Texas is attacking libraries.

In early November, an email dropped into the inbox of Judge Ron Cunningham, the silver-haired head chair of the governing body of Llano County in Texas’s picturesque Hill Country. The subject line read “Pornographic Filth at the Llano Public Libraries.”

“It came to my attention a few weeks ago that pornographic filth has been discovered at the Llano library,” wrote Bonnie Wallace, a 54-year-old local church volunteer. “I’m not advocating for any book to be censored but to be RELOCATED to the ADULT section. … It is the only way I can think of to prohibit censorship of books I do agree with, mainly the Bible, if more radicals come to town and want to use the fact that we censored these books against us.”

Wallace had attached an Excel spreadsheet of about 60 books she found objectionable, including those about transgender teens, sex education and race, including such notable works as “Between the World and Me,” by author and journalist Ta-Nehisi Coates, an exploration of the country’s history written as a letter to his adolescent son. Not long after, the county’s chief librarian sent the list to Suzette Baker, head of one of the library’s three branches.

This is a Texas tradition. There are always prudes and bigots who object to books that don’t pander to their blinkered, ignorant worldview — remember Mel and Norma Gabler? — the problem is that Texas actually listens to them, and has an army of conservative politicians that rush to impose their 19th century views on their electorate. Literally. That’s what motivated the Gablers to go on their long-running crusade to wreck the American textbook industry.

Norma and Mel Gabler entered the field of textbook reform twenty years ago, after their son Jim came home from school disturbed at discrepancies between the 1954 American history text his eleventh-grade class was using and what his parents had taught him. The Gablers compared his text to history books printed in 1885 and 1921 and discovered differences. “Where can you go to get the truth?” Jim asked.

How dare our understanding of the world change? Although best known to me for their efforts to expunge evolution from biology classes, you can tell that what triggered them, from the timing, was race. Same as nowadays.

Bonnie Wallace’s letter is also revealing. The only reason she isn’t sponsoring a book burning is projection — she’s afraid the liberals want to do the same thing to her cherished books. I swear, though, no one is planning to ban the Bible, and if they were, I’d be right there in opposition. The Bible is a piece of our history, everyone should be exposed to it, just as they should be exposed to our history of slavery and lynchings. Besides, it’s such a useful tool for creating atheists.

She’s also lying about “pornographic filth”. Ta-Nehisi Coates’ book is not at all pornographic, but only frankly discusses the effects of racism…but yeah, they don’t want that known.

They also want to ban a whole batch of children’s books, such as Sendak’s In the Night Kitchen, which is quite a lovely weird story, and has, as I recall, two pictures of naked little Mickey falling through a dream. My kids giggled at that and always pointed it out because nudity is so highly censored from all of our books. It was innocent, not pornographic, and only stood out because the prudes and assholes have gotten their way for so long.

Now it’s getting worse. They’re dissolving library boards so they can pack them with conservative Republicans.

Cunningham said in a statement that the restructuring of the library board was in keeping with Texas law and past practices to allow for “citizen participation from different perspectives.” The all-female board is overwhelmingly White and Republican, records show.

And the new board was ready to start focusing on its top priorities, including adding content of “academia, educational value and character building” and consulting with a local Christian school about their needs, Wells wrote in one email. Wells, a member of the local tea party who home-schools her six children, did not return calls for comment.

Panel members often stop to pray over questions brought up in meetings, and until the Lord answers, they can’t resolve them, according to county officials who spoke on the condition of anonymity because they feared repercussions.

Most chillingly, they’re quietly disappearing books they don’t like from the libraries, firing librarians, and hinting that they aren’t required to even have a library.

“The board also needs to recognize that the county is not mandated by law to provide a public library,” Cunningham wrote to Wallace in January.

I remember the Satanic panics of the 1980s, when all kinds of baseless nonsense about cults and child sacrifice and secret underground rituals made the rounds (often abetted by the police — ACAB — who made up horrific and false stories to further the repressive bullshit). We’re in the middle of another one right now. Their chants are all about “pedophiles” and “grooming”, and they use them and their lunatic fringe Christianity to justify all kinds of oppression.

Many who spoke praised the commissioners for their recent work “saving the children of Llano County” from “pornography” and “pedophiles,” often breaking into enthusiastic applause and shouts of “Amen!” Tension erupted when latecomers stuck in the hallway attempted to speak. “I’d like to speak in the name of Jesus!” one man yelled. 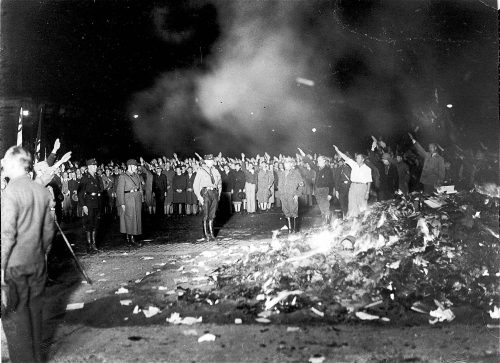 OK, which of you guys requested Second Winter? » « This super-villain must be stopped