The Kentucky legislature was finally fired up to enact laws to prevent a terrible crime. No, it wasn’t to finally do something about that blight, Answers in Genesis, that is robbing them blind and promoting ignorance — both houses in Kentucky are dominated by Republicans, and that stuff is their stock in trade. What they decided to do was pass a law absolutely prohibiting trans kids from participating in sports. The trans menace must be stopped in its tracks!

In this case, it’s one (1) trans girl in the entirety of the state. Here she is. Her name is Fischer Wells. 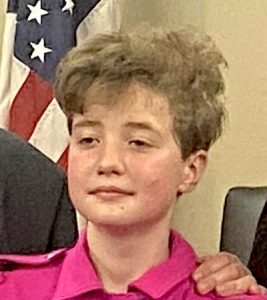 I wonder how it feels to have your nefarious plan to play field hockey with your friends foiled by the entire weight of the Kentucky Republican party being brought to bear on you? The governor tried to veto the law, but over a hundred Republicans got together to override the veto. More than a hundred bullies made sure to shut down one trans 13 year old.

They’ve already put up some high hurdles against trans kids, and this is just the final bit of bullying.

Although it’s unclear if other Kentucky trans students are also competing in school sports, even qualifying to play for a school team is extremely difficult due to burdensome requirements imposed by the Kentucky High School Athletic Association (KHSAA). The KHSAA guidelines mandate that trans athletes must undergo gender-confirmation surgery prior to participating on sports teams that align with their gender, which bars the vast majority of youth from competition.

Kick those trans kids while they’re down, Republicans! You must be so proud.