Honestly, I think the Ark Park is doing better than I would have expected, and they do have a steady flow of gullible visitors. There’s a regional travel agency that advertises trips from Morris, MN to the Ark Park all the time — they have to load it up with lots of other stuff to make it appealing, though.

I’m already bored at the starting bus trip from Morris to Dubuque. Would my wife and I pay $2600 for a week of random Midwestern tourism? No, we would not. But then I suspect their market is church-going old people with lots of disposable income, and we don’t meet most of the criteria.

There were a lot of suckers born 60+ years ago, so they do have a constant dribble of yokels bringing shekels to the AiG attractions. But is it the economic boon to Kentucky that they promised? No, it is not, as Americans United points out.

Americans United never opposed Ham’s building of Ark Encounter, but we did stand against taxpayers being compelled to support what is clearly an evangelistic enterprise. We believe Ham and his Answers in Genesis (AiG) ministry should have relied on voluntary contributions from his co-religionists.

Ham justified the raid on the public purse by asserting that Ark Encounter would be a great boon to the nearby town of Williamstown, whose leaders agreed to float $62 million in junk bonds to get the project going. Town officials clearly believed the attraction would benefit the area economically.

You just had to believe! They suckered the Kentucky state government into believing this monstrous monument to ignorance would be a world-class tourist attraction, but it’s not. It’s a senior-citizens-from-Dubuque-class attraction.

“It has never reached even the minimum number of visitors for its first year of operation,” Trollinger wrote. “And with every passing year the tourist site falls farther short of what AiG promised.”

Trollinger and his wife Susan have visited the ark several times, most recently last month. He writes, “After our March visit to the Ark we drove through Williamstown. Six years after the tourist site was constructed, and as documented by the wonderful film, We Believe in Dinosaurs, Ark Encounter has had little noticeable economic impact on the small town that provided the tourist site with such gifts.”

What about all those jobs Ham promised? Apparently, local residents either don’t want them or don’t qualify for them. (Ark Encounter employees must sign a statement of faith saying they agree with AiG’s fundamentalist religious views.) Dan Phelps, president of the Kentucky Paleontological Society, keeps a close eye and Ham’s doings and pointed out recently that Ham has proposed hiring students from nearby Christian colleges and is raising money to build housing for them on site.

Worst of all (for AiG), they can’t recruit the gullible locals to come work for them at low pay, in a job that requires you to swear a loyalty oath to Ham’s version of the Bible. Not even the residents of Kentucky who voted to pay for a giant pseudo-boat are stupid enough to do that. He’s building cheap dorm housing for Christians whose fanaticism blinds their common sense, and now he’s playing the culture war card: move to Kentucky and work for cheap before the liberals teach your children it’s OK to be gay! 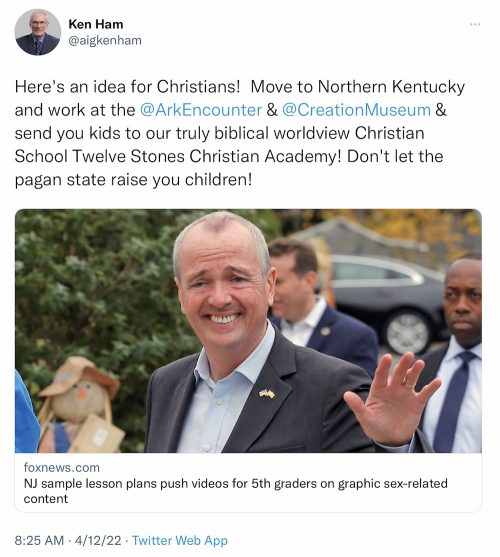 I don’t get the point, though. As we all know from the Bible, he only needs 8 employees to keep the Ark running. Less, even, since his Ark is mostly empty with nothing but lots of dioramas and wooden crates full of plastic animals, and isn’t even a boat.

Of course, Noah didn’t need parking attendants and ticket-takers. Or a zip-line! Yeah, that’s probably it, the zip-line is a huge resource sink.

Tweaking the work week » « Time to start on Developmental Genetics!