Maybe it doesn’t look like much, and maybe it’s tiny at only 1.5cm long, but this is a 522 million year old cephalopod shell, found in Newfoundland. 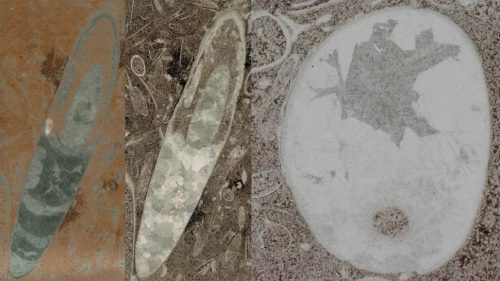 To be fair, the investigators are cautious, only tentatively calling it a cephalopod…but it’s an oval shell with a siphuncle. None of the squishy bits are preserved, unfortunately, but it’s enough to suggest that this is a cephalopod, especially since it’s at about the right time period predicted.

One sad thing about it is that we still feel a need to issue a disclaimer when commenting on it.

“Cephalopods are really different from other mollusks,” Vecchione said. Still, “we do know that they’re mollusks, they’re not from outer space like some people have said.”

Yeah, those assholes from the Panspermia Mafia, Wickramasinghe etc., have really tainted the public perception of cephalopods.

Creepy ghouls » « Shut up, Meyer, your schtick is getting old