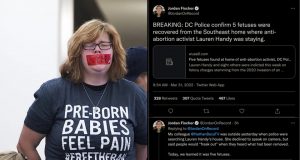 Lauren Handy is the Director of Activism for a group called Progressive Anti-Abortion Uprising. She’s a fanatic. She is currently under investigation for federal civil rights offenses after blocking access to a reproductive health center, a terribly common tactic used by anti-choicers — it’s nice to see that in some places these people are being prosecuted. As part of the investigation, Handy’s home was raided, where an unpleasant surprise was uncovered.

DC Police discovered five fetuses at the home of an anti-abortion activist in Capitol Hill on Wednesday, the department has confirmed to WUSA9.

Officers responded shortly after noon to a home on the 400 block of 6th Street SE to investigate a tip about potential bio-hazard material in the residence. Once inside, they located the fetuses. The remains were collected by the D.C. Office of the Chief Medical Examiner.

The home was occupied by Lauren Handy, an anti-abortion activist who was indicted along with nine others Wednesday by a federal grand jury. Handy is accused of felony conspiracy against rights for a blockade inside a D.C. abortion clinic in October 2020.

WUSA9’s camera was outside as DC Police homicide and forensic services detectives took evidence out in red biohazard bags and coolers from the rowhouse’s basement.

Two questions: where did they get the fetuses, and why? They were either rifling through the organic waste at a hospital or clinic, or they had an insider who was stealing such material. Both are illegal, and are going to lead to more people getting fired.

But why? These activists rely entirely on shock tactics to trigger disgust in citizens…but everything that is a product of surgical procedures in hospitals is going to be repulsive to ordinary people. Cancer surgery is going to produce blood and bits of excised material that no one in their right mind is going to want on display in their home, and likewise for any necessary health procedure.

You know what’s grosser than flaunting surgical byproducts in public? Being a sensationalistic professional liar who wants to make women suffer.

Good advice. Just do the opposite. » « Friday Cephalopod: Half a billion years of making me happy