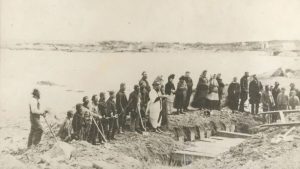 Burial service for victims of the SS Atlantic shipwreck, April 1873.

At last, I’ve finally reached the end of The Atlantic. I have read one article that is like a flawless, pure distillation of everything that annoys me about waffly liberal writing. Sarah Hepola writes a long rambling pointless essay titled The Things I’m Afraid to Write About. She starts off with a conversation in which she talks about a literary party in New York City that she had attended — already we’re deep into the territory of the cliche. Here’s what bothers her:

“So why were you there again?” he asked.

“Because I wanted to talk to other writers about the things you can’t write about anymore.”

His eyes narrowed. “What things can’t you write about?”

“Gender, sex, politics. The things you and I discuss.”

He ran a hand through his hair. “I’d think those would be the most interesting things to write about.”

I gave him an exasperated look. “Are you kidding? I’d get killed!”

His look wasn’t judgmental. I’d say it was disappointed. What he said was slow, and careful, and I’ve never forgotten it. “But I thought that’s what writers do.”

Then, the rest of the over-long pseudo-literary noise is Hepola whining about all the things she can’t write about, which she’s writing for a fairly prestigious magazine, and she somehow manages to squander this opportunity by not saying anything about what she thinks, except to say, gosh, here are topics I won’t write about. It is a colossal waste of time.

She ends with a promise to work up the courage to speak up more about her positions on all these vaguely stated topics. You know, the ones she couldn’t speak about in this tedious essay.

Ready? But she didn’t. How did this get published? Were the editors deeply impressed with her ability to say nothing at all at such great length? Most writers, when they write, write because they have something to say; this writer wrote because she had nothing to say, and didn’t say it. And The Atlantic published it.

No excuses acceptable » « Running the gauntlet