I have been discovering that many people seem to have a weird perspective on spiders. They’re just animals, you know. They do the same stuff that squirrels or cats or lizards do: they eat, they drink, they court, and are entirely mundane in their behaviors. I’ve noticed, for instance, that one of the things that interested people was seeing that they drink! They have a heartbeat! I’m sure that even a moment’s thought would have made them figure out that of course they do…but we don’t usually think of spiders that way.

So here’s a story about a spider slurping up water and using it to rehydrate the dessicated bodies of their prey. Groovy. Spiders are clever enough to make instant bug soup.

One night in late December 2020, John Gould—a behavioral biologist at the University of Newcastle in Australia—was on Kooragang Island in southeastern Australia, surveying the area for a threatened frog species. Near an ephemeral pool, he spotted a long-jawed orb weaver spider (Tetragnatha) suspended in a web anchored in some vegetation. About two minutes later, Gould watched the arachnid suddenly “bungee” down to the pond’s surface, retrieve a large globule of water in its jaws, and race back up the silk line in a matter of seconds.

As soon as the spider ascended to its web with the liquid cargo, Gould knew he “had observed something really peculiar.”

He watched as the spider returned its jaws to a shriveled, partly drained insect it had been feeding on, droplet and all. The first-of-their-kind observations were published in the journal Ethology in January.

Just yesterday I was feeding my spiders and watched as one bungee-jumped down and scooped up a fly to haul back into its home cobweb. Clever girl. It was impressive how agile and adept it was, but that’s simply its nature.

Oh, also, tetragnathids are cool. They’re common, one of the more common spiders I see around here, but also diverse, with a lot of species I can’t distinguish. They make gorgeous orb webs, the classic kind with radials and spiral fibers, and they’re distinctive, with skinny, elongate bodies and huge jaws.

Now I’m pining for spring, when the tetragnathids will be back decorating the shrubbery in my yard. Until then, here’s a photo below the fold — arachnophobes, don’t click through! 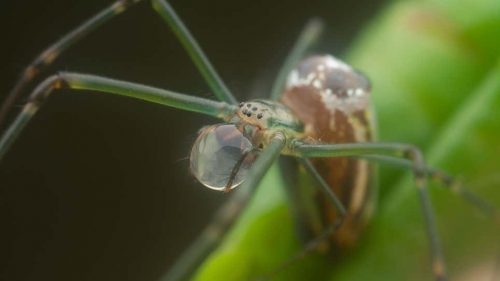 Pay attention, debaters » « You’d think Harvard professors would be more thoughtful than this