Last night, I got this bulk email.

I have just learned that Philosophia about to publish an article by Kevin MacDonald, emeritus professor of sociology at CalState Long Beach, at doi: 10.1007/s11406-021-00439-y

MacDonald has long been outspoken in his conviction that Jews are driven to destroy the cultures of the countries they live in. He is a Holocaust denier. He argues that Jews should be subject to civil disabilities, proscriptions, and special high taxes. He openly supports white nationalist and neo-Nazi organizations.

The paper you are publishing is as full of the falsehoods and bile as is everything else he has written. As part of the endeavor of philosophy and as part of the civilized world you as editor-in-chief ought immediately to retract it.

I have BCC’ed this email to every philosopher I know, and some other scholars, asking them to join in protesting this publication.

How bad could it be, I thought. I don’t respond to these mass calls for action without checking. So I did. I looked at the article in question. 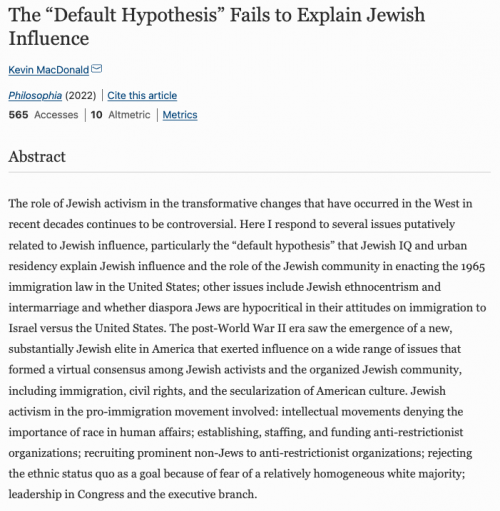 Oh my god. That’s just the abstract. Every paragraph of the article is essentially, “The Jews are conspiring to steal our essence”, and the editors of Philosophia (“Philosophical Quarterly of Israel”) didn’t notice? Have they no reviewers? Do they just have a policy of allowing any old crap they find in their in-box to be published without criticism?

Apparently, Kevin MacDonald squats in his office, simmering in a constant state of hatred of Jews, convinced that they are running a massive conspiracy theory to destroy all non-Jews, and in particular, scrawling out long missives objecting to any criticisms of his past work, all dedicated to proving that The Jews run the world. What a horrible little man, and shame on Philosophia for publishing his bile, and extra shame to CalState Long Beach for allowing him to lie in the name of their university.

Here’s the editor of that journal.

If anyone is tempted to think that Philosophia is publishing this garbage (including previous garbage they published) because of a naive commitment to free speech, please remember that Asa Kasher, the EIC, is this Kasher here. pic.twitter.com/edDR8oKOFQ

I have no idea what he was thinking. Maybe he was flattered by MacDonald’s claim that he and his co-religionists run the planet?