Here’s how the Smithsonian Tropical Research Institute (STRI) was founded.

When the Chagres River was dammed in 1913, water rose to engulf 164 square miles of tropical rainforest, creating Gatun Lake and many small islands peeking above the surface. Naturalists were drawn to Barro Colorado Island, but for decades women were barred from staying overnight. David Fairchild, one of the island’s founding figures, advocated for the prohibition of women, writing in a 1924 letter that the island should remain a place “where real research men can find quiet, keen intellectual stimulation, freedom from any outside distraction.”

Right. I’ve been to places like that, where they want you to think it’s all lofty high-minded serious work, but that’s not what you get when you exclude women. You get a frat house. It’s farting, crude jokes, and lots of drinking, which is excused because everyone is “working hard” during the day…which never made sense to me, because when I’ve been working hard, I want to retire to my room, maybe read a book for a while, and get a good night’s sleep. That’s how you recover from hard work. But then, after you’ve built a culture of masculine privilege for a few decades, you might succumb to pressure to allow women to join in the research, but you’ll do it your own way. The established men get to vet all applicants and decide who they’ll let in, and hell no, they aren’t going to change the culture. Instead, these select women will be expected to join in the hard-drinking frat boy culture, and then they get to add rape and sexual harassment to the party.

I could have predicted it. That’s exactly how the STRI evolved, and wow, is it ugly.

Many researchers who set foot on the island consider the opportunity a dream. But 16 women scientists interviewed for this story described a pattern of sexual misconduct by high-ranking men at the institute, one of whom acknowledged his inappropriate behavior to BuzzFeed News. The women said that struggling to fend off the sexual demands of scientists with the power to determine a young researcher’s career trajectory left them feeling traumatized and isolated.

Seven of the scientists said they have stopped visiting the institute or collaborating with its staff on account of the unprofessional behavior they said they experienced or witnessed there, and two have left academia altogether — a #MeToo brain drain that has cost science an incalculable toll of lost research.

“I was spending more and more time figuring out how to navigate the culture there,” said Nina Wurzburger, an associate professor at the University of Georgia who worked at STRI from 2008 to 2012 but said she no longer pursues major research projects there because of the pervasive discrimination and sexual harassment.

Internal emails and complaints reviewed by BuzzFeed News, as well as interviews with 25 scientists, show that STRI leaders for years issued little more than verbal warnings or social restrictions to employees accused of sexual misconduct while allowing them to continue interacting with newly arrived young researchers. The institute eventually took additional disciplinary action against two of the accused scientists in 2019 and 2020. A third scientist, named in this story, continues to work at STRI.

Two scientists were disciplined out of 1200. I’m not exactly razzle-dazzled by their ‘vigorous’ response.

Here’s what needs to be done: presumably, since they’re able to say there are “leaders” at this organization, they have a chart of the hierarchy. Lop off the top of the chart. All those men get sent back to their home institutions, banned from working at STRI, or put back on the job market. They will no doubt claim to be respected, famous scientists who add prestige to the institution…but that just means they should have no trouble landing positions elsewhere. Appoint a woman to run the show. Put in place a new hiring committee that is at least half women. Rebuild the personnel from new applicants.

Yeah, it sounds draconian, but it’s what needs to be done. The worst solution (but probably the one the Smithsonian will implement) is to keep all the same people in charge, let the culture persist, and send them memos that go “tut-tut”, while continuing to bring in a few women, a handful at a time, to be sacrificial lambs to the frat house meat-grinder. This is a case where they need to burn it to the ground, metaphorically, to clear out the sex pests.

Not literally, of course. Look at the place! It’s beautiful! 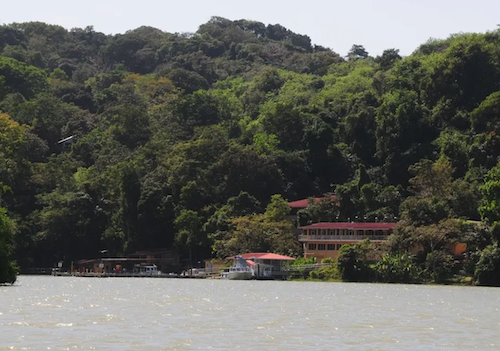 Think of all the spiders living on that tropical island…

But then you read about how the assholes mismanaged it (ALL the trigger warnings on that article), and you wouldn’t want to be anywhere near it. It’s not the spiders, it’s the venomous creeps who work inside it.