Thomas Friedman is one of the many reasons I do not and will not subscribe to the NY Times — they have way too many assholes granted a sinecure to babble their stupid opinions on one of the more prestigious newspapers in the world, and I guess all we can do is make a little effort to reduce their reputation, one reader at a time. So you’ll have to read his latest stupid column via a link to a site that skims off articles from the NYT.

Anyway, he starts off with classic centrist garbage — you know, both sides are wrong and extremist, therefore we ought to pick something in the middle.

On a third hand, suburban greens will tell you that the world is ending, but that they don’t want any windmills, solar farms or high-speed rail lines in their backyards.

On a fourth hand, most of today’s leaders will tell you that the world is ending, so at Glasgow they’ve all decided to go out on a limb and commit their successors’ successor to deliver emissions-free electricity by 2030, 2040 or 2050 — any date that doesn’t require them to ask their citizens to do anything painful today.

He’s right that the Glasgow meetings were relatively ineffective because they were all about compromise, but isn’t that what Friedman wants? Split the difference, find a middle ground, characterize all environmentalists as wackos? He got what he wanted, so he can’t complain that his very own brand is a failure. His own solution is to further empower technocrats and corporations to engineer us out of the hole the technocrats and corporations have dug us into.

His answer is this turd to make it all worse.

In short: we need a few more Greta Thunbergs and a lot more Elon Musks. That is, more risk-taking innovators converting basic science into tools yet to be imagined to protect the planet for a generation yet to be born.

The only reason we need more Greta Thunbergs is because the Elon Musks have been running amuck. He’s not a “risk-taking innovator” — he’s a billionaire who is busy looting the planet and our economy to fuel his ego. He doesn’t do science! He spends money on whatever gives him a good return on his investment; his fantasy of launching people (not himself, obviously, other people) to Mars is flaming anti-environmentalism.

I am not surprised, though, that Thomas Fucking Friedman worships Musk as his Space Jesus. 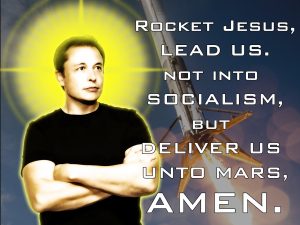 I’m getting my booster this morning, and apparently I have much to look forward to » « It’s not nice to make fun of Southern yokels