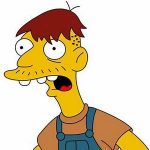 No, really, I know there are lots of smart people in the South, just as I know there are a lot of stupid people here in the Yankee states (oh boy, do I know). But you’d think the educational institutions in Southern states would know better than to set themselves up as the butt of a joke. Kentucky has a special problem, since they’re home to Answers in Genesis, the Creation “Museum”, and the Ark Park. So what the hell is Kentucky Educational Television doing?

I think I’ll just quote one of those smart Kentuckians, Dan Phelps, on this one.

If someone dies, what will KET say?

Back in August, during a fundraiser, Kentucky EDUCATIONAL Television aired an infomercial for “Dr. Josh Axe” a chiropractor. He touted his version of “ancient remedies.” Every ten seconds or so of his spiel, the camera did a close-up of the grinning/nodding zombies in the audience nodding their heads in total agreement. Some of the things he said concerning diet made sense, but why couldn’t the PBS station get someone reputable to say that? Most of the “ancient remedies” touted seem to based on symbolism. For example:

“Tomatoes have four chambers, just like your heart.”
“Mushrooms are the same shape as adrenal glands”
“Carrots in section look like the eyes iris”
“Walnuts look like brains”
“Celery looks like bones”
“Beets are the color of blood…”
“The color of the food will tell you what part of the body it will heal.”

More recently, the website “The Encyclopedia of American Loons” did a nice entry on Axe.

Today I was looking at KET’s schedule and found they are showing more of Axe’s infomercials in late November (see photo).

Why KET? Why? If someone dies, what will KET say? 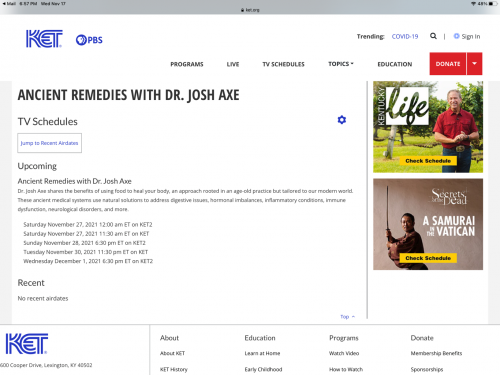 Rational Wiki also has an entry on Axe. He also has an inordinately popular YouTube channel if you’d rather hear him say stupid things with his own mouth, but since he already has 2 million subscribers I won’t link to it.

By the way, Josh Axe is from Ohio.

Shut up, Thomas Friedman » « This is the flibbertigibbetiest