Even if it is a little depressing. Here he comments on a book by Tony Judt.

I had never read so merciless a book. Tony had no use for pieties—no tolerance for invocations of a “Good War” or the “Greatest Generation.” Power reigns in Postwar, often in brutal ways. Tony writes of Jewish survivors of the Holocaust returning to Poland only to be asked, “Why have you come back?” He introduced me to intellectuals, such as François Furet, forced to reckon not just with Stalin’s crimes but with a discrediting of a “Grand Narrative” of history itself. “All the lives lost, and resources wasted in transforming societies under state direction,” Tony writes of this reckoning, were “just what their critics had always said they were: loss, waste, failure and crime.” Early in Postwar, Tony quotes the observations of a journalist covering the ethnic cleansings that characterized postwar Europe. The journalist self-satisfyingly claims that history will “exact a terrible retribution.” But, Tony tells us, history “exacted no such retribution.” No righteous, God-ordained price was to be paid for this crime against humanity. The arc of history did not magically bend. It was bent, even broken, by those with power.

That resonates with me, too. There is no trajectory of history in evolution, either, just a story we tell ourselves after the fact. There’s nothing but chance and a directionless, generation-by-generation stumbling, with no goal but survival, and afterwards the survivors pat themselves on the back and pretend it was destiny that they made it.

It’s also why I have no sympathy for Pinkerisms. It’s all retrospective coronations all the way down, self-defeating reassurances from the so-far successful that the status quo will carry us forward into a glorious future. It never works that way. Every advancement is the product of a battle by those who say “Not good enough!” and who strive to do better.

And sometimes the better don’t make it anyway. 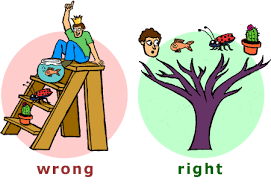 Steve Bannon is just plain weird…or he’s America’s Rasputin » « What do you mean, this isn’t what a poetry slam is?