Brachyury (Greek for “short tail”) is an important protein in animal development — it’s found in all chordates and is expressed along the midline, and sets up the anterior-posterior axis. It seems to play an essential role in defining tissues along the length of the animal, and many mutations have been found in the gene TBXT for it that cause defects in the spinal cord. In addition to the short tail phenotype it’s named for, different variants affect other regions as well. For instance, you probably know that almost all mammals have precisely 7 cervical vertebrae, but there is a mutation in TBXT that reduces that number to 6.

So, basically, if you want to profoundly muck up the developing vertebrae and spinal cord, mutating TBXT is a way to do it, as long as you don’t mind inducing neural tube defects, like say, spina bifida. It’s a dangerously significant gene to tinker with, and most of the outcomes would not be good. But note — humans and other hominoids have an inherited, ubiquitous spinal cord defect. We don’t have tails, unlike other mammals. Could we be carrying a mutation in our TBXT gene? Could that be what caused all us apes to lose our tails? Maybe we should look and compare our TBXT to that of other animals. Huh, what do you know…we do have a curiously broken TBXT.

A little background first. Eukaryotic genes are broken up into segments called exons alternating with other segments called introns. To make a functional gene product, like Brachyury, the cell has enzymes that cut out the introns from the RNA and splice together the exons. The intronic RNA is then generally allowed to be broken down and recycled. So TBXT has 7 exons, E1, E2, E3, E4, E5, E6, and E7, with intervening introns which must be snipped out and the exons spliced together to make a final, complete RNA, E1-E2-E3-E4-E5-E6-E7, which will be translated to make the Brachyury protein.

Another complication: there are these short bits of selfish DNA called Alus which are scattered throughout the genome. We have over a million Alu elements sprinkled throughout, and usually they do nothing, although if an Alu gets inserted into an exon of a gene, it can disrupt the function of that gene. The good news: there is no Alu stuck in the exons of TBXT. There are a couple of them in the introns of TBXT, but remember, the introns get chopped out and thrown away, so they shouldn’t matter. Except that in this case, they do.

In us hominoids, there is one Alu, AluSx1, in intron 5. There is another Alu, AluY, in intron 6. They happen to complement each other in reverse, so in the TBXT RNA, before the introns are edited out, the RNA folds over to make a loop that allows the two Alus to bind to each other. This messes up the editing, because the cell then snips out the introns and the loop, throwing away exon 6. Uh-oh. That means that instead of producing the full length TBXT, we make a shortened version lacking exon 6, called TBXT-Δexon6. 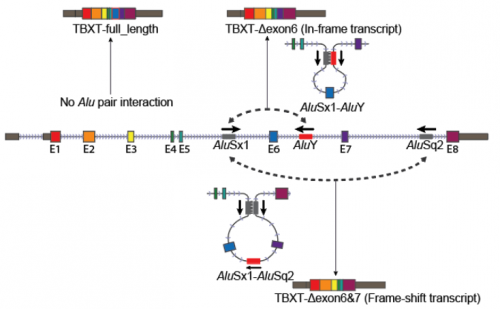 This observation was tested with a couple of nifty experiments. First question: is it really the Alus that are causing this error in splicing? Yes. Doing a little gene editing and knocking out either Alu in human embryonic stem cells causes them to generate full length TBXT transcripts. These are just single cells in a dish, and while you might be curious to know if deleting those specific Alus in a human embryo would lead to it developing a tail, that would be unethical. In a sense, you’d be generating a neural tube defect, never a desired outcome, and we don’t know what other compensatory or cooperative genes to our, for us, normal TBXT-Δexon6 exist.

But hey, good news, we don’t have the same ethical restrictions when working with mouse embryos! Let’s dive into the mouse genome and insert Alus, just like ours, into the introns of the mouse TBXT gene! And so it was done, producing mice that made TBXT-Δexon6, and lo, they had little stumpy tails, or no tails at all. 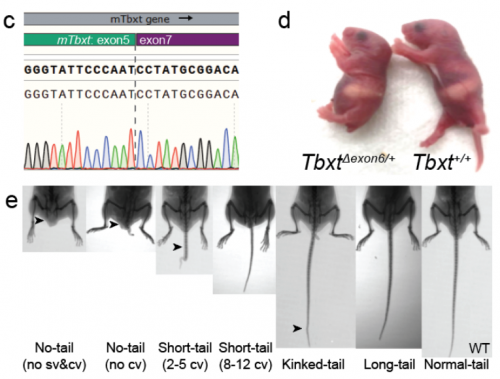 It’s lovely work, but I still have to disagree a little bit with their interpretation. Their model of hominoid evolution puts the tail-loss mutation right at the base of the progression.

That’s too simple. The lethality of the homozygous mutant in mice, while we homozygous mutants are fine, tells me that there are a lot of other genes that work together with TBXT to make a viable embryo — that we have a suite of supporting genes that can compensate for the lethal effects of TBXT-Δexon6. This model assumes that all those supporting roles evolved after the TBXT-Δexon6 mutation occurred. There is no reason to think that. Why not consider that our ancestral hominoid had a few exaptations that made it slightly more fault-tolerant in axis formation? Put those additional mutations ahead of the AluY insertion. Then have additional mutations afterwards. Our ancestors were not mice, so there’s no reason to think they’d have had the same response (that is, the lethality) to TBXT-Δexon6 as do modern mice.

What are you wearing? » « Kent Hovind goes to jail…again!