I got out of Facebook, but the stench still follows me. Yesterday, a reader told me about a new Facebook group that was recruiting. It’s called “Skeptic Revival”, and its aim is to resurrect the old skeptical movement, you know, the kind of antique skepticism that existed before the Deep Rifts shredded everything, the kind of skeptical organization that Don Draper would have loved to join. The first problem is that Barbara Drescher is leading this effort, and I couldn’t imagine a worse person to rally a modern skeptical movement…until I saw the rogue’s gallery she’s assembled in her big tent. 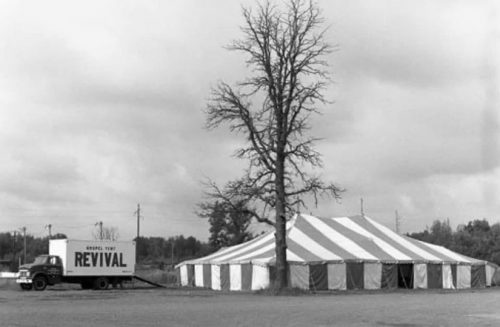 There’s DJ Grothe, former president of the JREF who ignored sexual harassment complaints and lied about them.

Russel Blackford, generic philosopher and waffler in the middle ground who dislikes all those SJWs.

Abbie Smith, deranged hate-blogger (I thought Drescher despised those?) who started the Slymepit.

Just seeing these few names has me throwing up in my mouth a little bit — I wouldn’t want to be seen in public with any of these people, let alone join the same club. These are the people the rifts formed to separate us from their regressive brand of conservative skepticism, but there they are, standing on the far side of the chasm.

If you want to join them, feel free: here’s a link to Skeptic Revival. I will think less of you for joining, but I won’t know, I won’t be following their shenanigans, I’m not on Facebook, so you can secretly join the narrow-minded skeptic harasser’s club. No one who matters will know. Except yourself, of course.

I hate Tuesdays and Thursdays » « Yet another of those stories