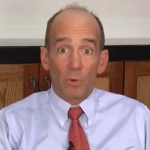 Would you buy a cancer cure from this man?

Social media are a cesspool — it’s not so much “social” as it is “manipulative commercial/capitalist propaganda media”. It’s a net of a thousand lies, and Facebook and Google are its eager, willing enablers. It wouldn’t take much to improve it, but they won’t, because they make too much money off frauds and lyin’ politicians.

For example, would you believe that 65% of all the vaccine lies are driven by just 12 people? You can read all the details, but I believe it — there are people who are really good at wielding the megaphone of the internet, and have no other skills or learning at all, and they have an outsized influence. Here are the Disinformation Dozen:

These are the people responsible for most of the memes and assorted garbage that’s poisoning minds all over the world. Mercola, for instance, has a huge and profitable quack empire, selling supplements and snake oil, and giving away lies for free. In the complete analysis, it goes through each of the twelve and states whether they have active accounts on Twitter, Facebook, or Instagram…would you believe that Mercola, who has been a notorious quack for decades, is active on all three? He doesn’t get any pushback at all, despite peddling cancer cures that don’t work, as well as claiming that COVID-19 doesn’t exist, but if it does, you can treat it with hydrogen peroxide. He’s been getting filthy rich off this nonsense, which explains why his accounts weren’t instantly yanked.

The Bollingers: active on all three. They’re anti-vaxxers who claim the vaccine kills children.

Islam claims to have beat COVID-19 with chicken soup. Banned from Facebook, still lying on the other media.

Buttar claims that the vaccine will sterilize you. Still active on all three.

Elizabeth claims vaccines are part of a conspiracy theory to make everyone sick. Still active on all three.

Ji claims that the vaccines killed more people than the disease. He’s been kicked off Twitter and Instagram, but is still on Facebook — he runs a snake oil store.

Brogan partners with Ji, and has been booted from Facebook but still babbles on Twitter and Instagram. Nice synergy — between the two of them, they’ve got the big three covered.

Northrup is one of those hydroxychloroquine promoters. Still active on all three.

Tapper is a chiropractor, anti-vaxxer and anti-masker who says stupid things like “There is a total lack of evidence that viruses can live outside the body” — which makes no sense and is not even wrong. Still active on all three.

Jenkins seems to be riding Kennedy’s coattails. Still active on all three.

These twelve people are all using Facebook, Twitter, and Instagram to spread misinformation, and are doing it with very little complaint from the social media companies. Ban them. Ban them now. I know another dozen will just rise up to take their place, but if they just had real policies against medical quackery that they actually enforced, they could quickly ban those, too.

It’s kind of obvious that the idea of policies that inhibit active fraud on social media are considered a joke by Google and Facebook.