I knew it. For years I’ve seen the “dinosauroid” trotted out as an illustration of how dinosaurs could have evolved, if only that little space rock hadn’t messed up their progression. To me, it was symptomatic of a deplorable strain of teleological thinking in biology, and I thought it was totally bogus from the first glance. 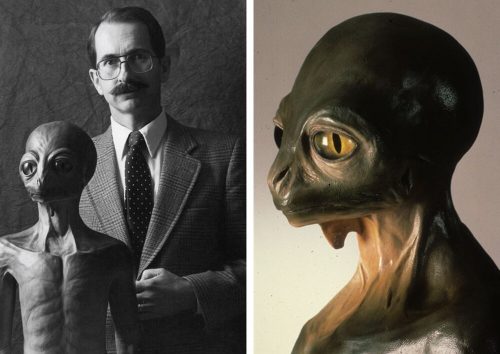 Why would anyone think a coelurosaur would gradually converge on an anthropoid form? So much of our morphology is a consequence of variations in our ancestors — ancestors that would not have been shared with dinosaurs. Yet here is this imaginary beast with ape-like details. How would it have acquired those?

Darren Naish has tracked down the history of this bizarre mannequin, and I am totally not surprised: we can blame Teilhard de Chardin, who had a pernicious influence on Dale Russell, the scientist who built it.

I’m confident that another factor contributed to the construction of the dinosauroid, but it’s something more controversial than everything discussed so far and is also harder to establish with any degree of certainty. I think that Dale Russell’s specific personal views on the nature of the universe and the position of humans within it played a role in everything that happened.

We know from the recollections of his colleagues that Dale Russell was religious, with an active spiritual life committed to Catholicism. We also know from statements made by Robert Bakker and others who discussed religion with him that Russell was fond of the ideas of Jesuit priest and palaeontologist Teilhard de Chardin (Campagna 2001, p. 7, Noble 2016, p. 41). Chardin (1959) argued for a directionality in evolution, that humans represent a point close to (but not at) the pinnacle of evolution, and that a humanoid stage was inevitable for those organisms approaching evolution’s final stage. Add to this the fact that Russell stated in correspondence his idea that “the human form might be a natural target for selective pressures” (as Russell wrote to anthropologist Noel Boaz in August 1984), and his implication – made several times in interview – that humans (and, by extension, other humanoids) are not simply additional animals (Russell 1987, p. 130, Psihoyos & Knoebber 1994, p. 252). We’re talking here about what’s been called the ‘inevitable humanoid proposition’, a concept often linked both to religiosity and to an anthropocentric view of the universe.

My personal opinion is that the dinosauroid was not, then, the honest experiment in speculative evolution that some authors have implied (e.g., Losos 2017; reviewed here at TetZoo). Instead, Russell had already decided that he wanted to showcase the possibility that human-shaped non-humans were ‘inevitable’, and that they might have a special place in the design of the universe.

Do not, under any circumstances, ever try to read Teilhard de Chardin’s Phenomenon of Man. I did, and it was the closest real-world experience to the horror movie trope of reading the Necronomicon aloud in a cabin in the woods. It contains damnable prose and arcane leaps of logic that defy rational thought. It is infuriatingly stupid.

You’re all going to try and read it now, aren’t you?

Before you throw yourself into that pit of madness, at least read Peter Medawar’s review. Be forewarned. Make sure you have a chainsaw and a shotgun near at hand.

What’s weird, though, is how so many discussions of this idea are gentle, almost apologetic in addressing Teilhard de Chardin’s and Dale Russell’s strange religious bias. Don’t take this stuff seriously — it’s Time Cube level of wrong, pure garbage in defiance of the scientific consensus with no evidence to support their interpretation. Worse, that delicacy in treating the teleological imperative has had some embarrassing influence — Carl Sagan’s worst book, The Dragons of Eden, was rife with it.

Also infected with the Teilhard de Chardin disease: Simon Conway Morris. The tentacles of that mad Frenchman extend everywhere, bringing insanity to all who view them.

Friday Cephalopod: They’re coming to get you now » « The drawing and quartering of Bobby Lee has been done