Ah, the things that outrage Catholics are always fair game.

In early July, The New York Times published two articles that had seemingly little to do with one another. One covered the Entomological Society of America’s decision to stop using the terms gypsy moth and gypsy ant. The other was about a new movie by the director Paul Verhoeven featuring an affair between two 17th-century nuns. “Forgive them, Father, for they have sinned,” the article begins. “Repeatedly! Creatively! And wait until you hear what they did with that Virgin Mary statuette.”

“When I read that article in the morning over my yogurt and cranberry juice, I couldn’t believe what I was reading. It was just disgusting,” Father James Martin, a Jesuit priest and writer, told me. He was talking about the movie, not the moths. He found it striking that the Times would deferentially cover a language shift meant to show respect for Roma people but would also print a story that relished a film scene in which a holy Catholic object is defiled. “Anti-Catholicism is the last acceptable prejudice,” he wrote on Twitter, linking to an article he wrote 20 years ago that explores why some Americans still treat Catholics with suspicion or contempt. His argument, then and now, is that it’s acceptable in secular, liberal, elite circles—such as The New York Times—to make fun of Catholicism, particularly the Church’s emphasis on hierarchy, dogma, and canon law and its teachings related to sex.

I would ask, did anyone make you commit a lesbian sex act? Did they make you watch it? Did you have to sexually abuse a Virgin Mary statuette at any time in your life? Does a statue have a higher moral status than the autonomy of a human being? Why are you bothered?

Anti-Catholic prejudice would be, for instance, burning churches and denying people the right to worship there, or discriminating against Catholics in employment, or tying Catholic priests to a stake and setting them on fire, or trying to pass anti-Catholic voting laws. That isn’t happening. Save your disgust for those kinds of actions, I will share it with you.

Martin thinks this is the “last acceptable prejudice”. How silly. There are many other prejudices that are still persisting, it’s not as if all the others have vanished leaving Catholicism the last bigotry standing.

Green: Do you still think anti-Catholicism is the last acceptable prejudice?

Martin: Yes, I do. The kinds of things you read about Catholics would never be tolerated for other religions. The faith is treated as a joke. People see chastity and celibacy as a negation of sexuality, so they see it as a threat. But I often point out to people: You know people who are celibate and chaste. You know people who are single. You know aunts and uncles. You know widows. No one thinks they’re insane or disgusting or pedophiles or dangerous. But when a person chooses it freely, suddenly they become a freak.

I don’t consider single people to be freaks, but remember…your religion is the one (among many) that worships virginity. You go the other way and think that not having sex makes you special and holy.

But nice of Martin to bring up freely chosen identities that ostracize one. You know, like homosexuality, a “moral disorder”.

To chose someone of the same sex for one’s sexual activity is to annul the rich symbolism and meaning, not to mention the goals, of the Creator’s sexual design. Homosexual activity is not a complementary union, able to transmit life; and so it thwarts the call to a life of that form of self-giving which the Gospel says is the essence of Christian living. This does not mean that homosexual persons are not often generous and giving of themselves; but when they engage in homosexual activity they confirm within themselves a disordered sexual inclination which is essentially self-indulgent.

As in every moral disorder, homosexual activity prevents one’s own fulfillment and happiness by acting contrary to the creative wisdom of God. The Church, in rejecting erroneous opinions regarding homosexuality, does not limit but rather defends personal freedom and dignity realistically and authentically understood.

Or being transgender, which “annihilates nature”.

The process of identifying sexual identity is made more difficult by the fictitious constract known as “gender neuter” or “third gender”, which has the effect of obscuring the fact that a person’s sex is a structural determinant of male or female identity. Efforts to go beyond the constitutive male-female sexual difference, such as the ideas of “intersex” or “transgender”, lead to a masculinity or feminity that is ambiguous, even though (in a self-contradictory way), these concepts themselves actually presuppose the very sexual difference that they propose to negate or supersede. This oscillation between male and female becomes, at the end of the day, only a ‘provocative’ display against so-called ‘traditional frameworks’, and one which, in fact, ignores the suffering of those who have to live situations of sexual indeterminacy. Similar theories aim to annihilate the concept of ‘nature’, (that is, everything we have been given as a pre-existing foundation of our being and action in the world), while at the same time implicitly reaffirming its existence.

Or that abortion is an unforgivable sin.

Human life must be respected and protected absolutely from the moment of conception.

From the first moment of his existence, a human being must be recognized as having the rights of a person – among which is the inviolable right of every innocent being to life.

I know people who are homosexuals, or transgender, or have had an abortion, and I don’t think they’re insane or disgusting or dangerous (or pedophiles, for that matter — where did that come from? Are priests always obsessed with pedophilia?). Yet the Catholic Church thinks they are disordered or insane or evil.

People who live in glass cathedrals and try to control the lives of other people probably shouldn’t be throwing stones. I don’t know how they live with the hypocrisy. 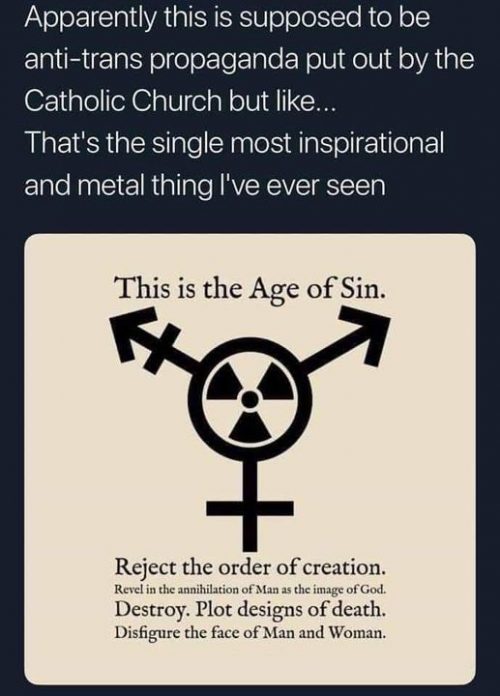 My, what a slender waist you have » « Some things aren’t “opinions”