The magic fly wings are back. I got this email yesterday:

Dear doctor Myers,
I’ve read your old article on the study about a saying of Muhammad that advised people to dip a fly if it landed on their drinks. Recently I’ve found an article (https://www.jstage.jst.go.jp/article/jnsv/66/Supplement/66_S283/_pdf) which honestly seems to me even more unscientific, but there is one thing that I don’t understand that I hope you may clarify. The fact is that this study doesn’t seem to have been published in a predatory journal, I’ve searched the journal and the publisher but I haven’t find them on the predatory publishing list. Maybe it is because the journal is Japanese(I’ve read articles about how many Indonesian studies were published in predatory journal but nothing about this specific publisher). By the way I’ve done a bit of research on this study and I found something which convinces me even more of my first thoughts, but I don’t have enough knowledge to debunk the study itself.

In the paper they quote 4 studies to support their claims:
-Reference number 9 was published on a predatory journal (called IDOSI).
-Reference number 7 is the experiment at Qassim University which you have talked about.
-References number 10 come from a book about miracles of the Quran, that was originally in Arabic and was later translated in Indonesian. It supposedly quotes a study from this book but since I don’t know the languages I don’t know how to search. But the fact that it quotes just the book and not the supposed study is very suspicious.
-Reference number 11 is from something in Indonesian language about “miracles” of the hadiths, I couldn’t find anything like this and the only other source where this is cited is from a larger paper (also in Indonesian)of the same author of this study, which basically talks about the same things.
All the sources are islamic, the study itself was done in a islamic university in Indonesia specialized in islamic teachings, probably by undergrad students of the nutrition faculty.

As I’ve said the only thing that I don’t understand is why this study was published on a non predatory journal, and I can’t refute it by myself. I hope you may give your opinion on this paper.

Here’s my article that they reference. The point being made on the basis of an Islamic hadith, If a housefly falls in the drink of anyone of you, he should dip it (in the drink), for the one of its wings has a disease and the other has the cure of the disease, is that the left wings of flies are dirty and full of bacteria, but the right wings have strong antibiotic properties. Only the right wing, mind you! This is from a book compiled in the 9th century, so it’s a remarkable assertion that was made without any application of scientific observation or empirical data collection — just poof, the idea came out of the mouth of some sage.

This, unfortunately, is the abstract for the new paper in question: 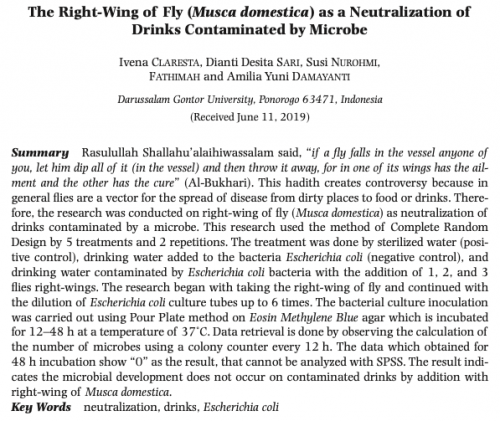 It’s a very badly written paper, like the work of a lazy undergraduate; of course, we also have to consider that this was written by an Indonesian student in English, not their native language. Still, it’s a naive bit of work that was done with little effort in the course of a few days that were somehow stretched out over 6 months.

It’s a simple experiment. Snip the wings off flies, dip them in water…wait, the protocol is weird. They have a negative control, water contaminated with E. coli, and a positive control, sterile water, (I feel like they labeled those backwards) but then they only test the right wings of flies dipped in contaminated water. This is peculiar, because they never test the left wings, despite the fact that this is a five-minute experiment that is then cultured on a petri dish for two days, with the assay consisting of simply counting colonies on the dish, and they only did it twice, with the only variable being the number (1, 2, or 3) of right wings they used. That’s it! And they published it!

You want to see the results? OK, here they are in all their glory. 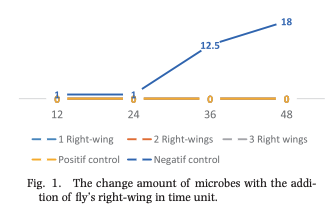 I spent way too much time puzzling over this for such a garbage paper. There are five sets of data, but only two lines on the chart; the blue line goes up over time, but the legend says blue is either one right wing or the negative control (which is the water contaminated with E. coli), the orange is the positive control (the sterile water), which is flatlined as you might expect. There is no observable data for the different numbers of wings. In the text they state that the number of wings didn’t matter — all two of the measurements for one, two, or three wings showed no colony growth. They don’t even do a comparison of left and right wings, which is the heart of their claim about the accuracy of Islam.

It’s remarkably trivial and bad, and it’s little more than a grade school science fair experiment. And it got published.

To address my correspondent’s questions:

(although, really, that title would make me question it), you have to consider each paper’s ideas. A journal like Nature has a rather more demanding filter than J Sci Nutr Vitaminol, obviously; that latter seems to be more of a wide open sphincter than any kind of filter.

Also, an article that in its introduction mentions that the idea they’re testing is contrary to the facts in the field, but that Muslims must still believe and be sure of the truth of the hadith is setting up a bias which demands a significantly more robust set of observations than this half-assed lazy casual “experiment”. If they are making a radical claim that defies all the observations and theories current in the field, they damn well better put in the work!

Dang, it can be annoying when medicine works too well » « Find the bodies