The words of the Prophet Muhammad (sallallahu ‘aleihi was-sallam) have been tested scientifically, and found hilarious. In work carried out under the direction of Dr. Jamaal Haamid, students at Qassim University examined a saying by the prophet, and have published it in a freely available pdf, The Hadeeth on the Fly, which you can download if you desire. Or you could just read this post, which summarizes entirely the complete content of the short paper, which is pretty much unpublishable and unbelievable anyway.

Here are the holy words.

(Notice that I include the original Arabic so there can be no confusion!)

If a housefly falls in the drink of anyone of you, he should dip it (in the drink), for the one of its wings has a disease and the other has the cure of the disease.

I do find that rather disturbing: so in Arabia, if a fly touches your water, you’re supposed to catch it, dunk it in deeper and slosh it around, to prevent disease? Arabian flies buzz around with pathogens segregated to just one wing, while the other one is healthy? How do they do that?

OK, setting aside the sanitary habits of Arabians and the mechanism by which this holy aphorism could be true, our intrepid students do carry out the obvious experiment: they drop a fly in a flask of sterile water, and then they pluck out the fly and immerse it completely in a second flask of sterile water. But then it all goes horribly wrong.

Here is the result of experiment #1. 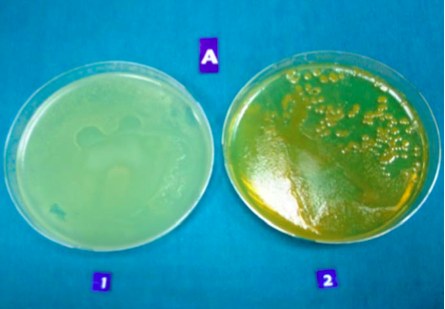 Plate 2- Cultured water sample taken from a flask containing sterilized water and where a fly fell (without submersion). Growth of pathogenic (disease causing) bacterial colonies of the E. coli type were identified after taking samples from the water in the flask for culture.
Plate 1- Cultured water sample from the same flask following the complete dipping of the fly. An entire disappearance of the bacterial growth seen in Petri-dish 2 is clear. The new bacteria growing in plate 1 was identified as Actinomyces, the one from which useful antibiotics can be extracted. This explains the complete inhibition of growth in plate 2

Plate 2 on the right is the one from water merely touched by a fly. There is no explanation for how the plate was produced, or how the bacteria were identified; the strange brown sludge suggests poor technique, though, and I’ve cultured E. coli myself — and that hideous thick fecal-colored glop looks nothing like E. coli.

Plate 1 on the left, made from water in which the fly was fully immersed, looks nasty too. It’s a poor photograph, but that looks like a thick lawn of colonies everywhere. How do they know it’s Actinomyces? I have no idea, they don’t say. It’s also a mistake to simply declare it beneficial — Actinomyces are opportunistic pathogens.

Having done the experiment to death, our brave students retired at the third repetition, wrote it up with no methods, no discussion, no literature cited (except for their holy book, of course), and no reliable, believable data. They also didn’t do the other obvious experiment, of snipping off the wings and examining the bacterial flora living on the left vs. right, but then, maybe they’re leaving that for the advanced students.

Any 10 year olds looking for a quick and easy science fair project, there it is. I’m sure you can replicate this experiment trivially — but please, talk to a real microbiologist first and learn how to streak a plate. You might also learn something about a control plate, which our U of Qassim students didn’t bother to do.

Of course, this work wasn’t carried out by 10 year olds. It was done by university students in a “Med 497” (a medical course?) in a department of medical microbiology. I strongly urge anyone visiting Saudi Arabia to avoid getting sick. They might try to treat you by swishing a fly around in your coffee.